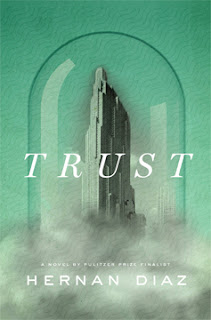 This is not a murder mystery, but there are certainly mysterious machinations afoot.

The reader involvement starts with the title. Trust? Should the reader trust Hernan Diaz, a potentially unreliable author? Hmm.

I enjoyed “In the Distance,” another book by Diaz. It contained many diversions, all of which were inventive. So, inventive was my default expectation for Diaz’ new work. I entrusted him to fulfill this mission, and I was not disappointed.

What is magnificent about “Trust’ is how Diaz concocts the stories. His writing, his description of the financial world — granted, I am not qualified to judge if it is an accurate rendering of the times and the possibilities of manipulation — his depiction of the gradations of madness, his drawing out the agony of his victims are brilliant.

Posted by Barbara Tom at 1:24 PM No comments: 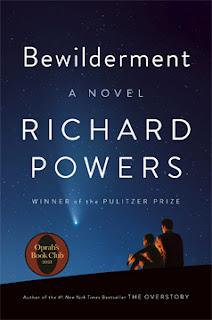 It is one of the most beautiful stories I’ve ever read. Richard Powers, author of the Pulitzer Prize-winning novel, “The Overstory,” has created another wonderment that embraces the entire world (and beyond). “The Overstory” and “Bewilderment” bring us closer to the wonders of nature, but also closer to the certainty we will lose them if we continue on our carbon dioxide-spewing path.

It’s a story for our times, written in order to avoid what is around the corner. It is also a story of love and bewilderment.

The City of Brass by S. A. Chakraborty 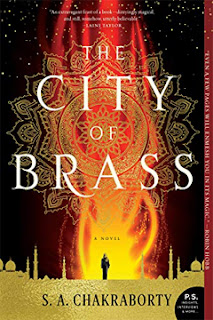 I admit a weakness for stories with genies. A recent favorite genie book didn’t even have an actual genie in it! “The City of Brass” is based on middle eastern tales of the djinn, or Daeva, as they are known in this book,

Eighteenth-century Cairo is pretty much our eighteenth-century Cairo. Where it veers into the fanciful begins with the supernatural healing powers of a young ragamuffin girl who tells “healing” fortunes. She is about eighteen or nineteen, does not remember her family, and lives by her (sometimes criminal) wits. One day the girl, Nahri, accidentallyconjures something bigger than she can handle. The menace she conjures is an “ifrit,” or evil spirit. What also is conjured -- but to help her this time -- is an unexpected and equally menacing Daeva, Dara, who saves Nahri’s life.

From that point on Nahri’s story alternates with (Prince) Ali’s. Ali Qahtani belongs to the magical realm that exists behind a veil regular people cannot cross. His tribe members are the peacekeepers between the “superior” Daevas and the shafit, the descendants of Daeva-human couplings. There are other Daeva tribes and other magical beings, some of whom are hostile to everyone else.

Dara is a Daeva who was exiled from the main Daeva city of Daevabad about a thousand years back. His sad story is slowly revealed. His family are the ancestral guardians of Nahri’s ancestral family; in other words, Dara is Nahri’s guardian. Although Dara has been exiled from Daevabad, he risks re-entering the city as an escort for Nahri, to return her to her rightful place as the last of her once-powerful family.

S. A. Chakraborty has created a complex history of the magical world and its inhabitants. The main characters are trying to reshape the magical world to accommodate their interests and beliefs. It makes for a story that is very “human” at its base.

“The City of Brass” is the first in a trilogy. The other titles are “The Kingdom of Copper” and “The Empire of Gold.”

P.S. There is a flying carpet.

Posted by Barbara Tom at 6:36 AM No comments: 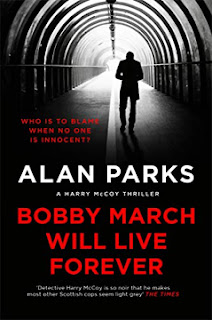 “Bobby March Will Live Forever” is the third in the Harry McCoy books by Scottish writer Alan Parks. I guiltily admit I did not read the first two but just jumped right into the third. I don’t think my comprehension suffered for that. Alan Parks is a good writer who can paint a large swathe of pertinent information efficiently and cohesively.

The story is set in the 1970s and is soaked in the music and dark vibe of a very noirish Glasgow.

Harry McCoy is a cop, a rare honest cop, with asterisks. *He knows the Glasgow criminal underworld very well. *Some of his best buddies are bad guys who sell drugs, have girlfriends who are prostitutes, and, yes, kill people. Mostly Harry cannot be bought. And that’s good enough to make him an exceedingly honest cop in a very corrupt section of the criminal affairs department of the Glasgow police.

As the story begins, Harry has been sidelined by his mortal enemy Bernie Raeburn, who has unfortunately become his boss. Even though he is the brightest bulb by far, Harry has to poke around with minor pencil-pushing cases instead of the higher profile ones he is usually gets. The big case of the moment involves the abduction of Laura Kelly, the teenage daughter of a working class couple. Despite a massive search, there are no clues. Is the girl dead? There hasn’t been a ransom demand. Even if there had been, Laura’s parents wouldn’t be able to pay it. Raeburn won’t let Harry anywhere near the case.

There are several story threads involving Harry’s criminal and near-criminal friends. His ex-girlfriend, Angela, is a little morally wavy and is heavily involved in the music scene. A minor celebrity, Bobby March, has returned for a gig in his hometown of Glasgow. Then he is found dead of a drug overdose. How does Angela figure into that scenario?

Then a friend, Stevie Cooper, a crime boss, has managed to get hooked on heroin. It imperils his stake in the criminal world by emphasizing his weakness. It is up to Harry to help wean him from his drug of choice. What else does Harry have to do since he has been sidelined?

Then Raeburn catches a young man, Laura Kelly’s boyfriend, and locks him up for abducting Laura, despite there being no body and no evidence. The public is baying for justice, and Raeburn is determined to cover himself in glory with a quick resolution.

All of these threads result in Harry being concussed, beaten, knifed, and kidnapped. It is a wonder Harry is still crawling by the end of the book. This is the thing about series books: The hero must survive. Harry survives. In the process the Glasgow underworld is thrown into upheaval.

For the record, there are some moments of lightness and romance, too, although I wouldn’t quite label what Harry experiences with the fancy name of “romance.”

“Bobby March” is impressive in what it accomplishes with its many storylines. It is easy to cheer for the increasingly battered Harry McCoy as the book erupts in the drama of the last third of the book.

Posted by Barbara Tom at 5:29 PM No comments: