The Language of the Dead by Stephen Kelly 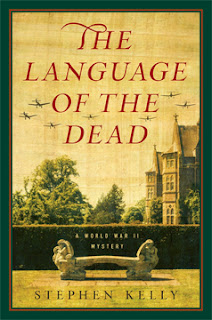 “The Language of the Dead” is subtitled, “A World War II Mystery.” The war is mostly a supporting character in this book, because the mystery comes down to base human nature, not national disagreements. But it doesn’t help that there are bombers flying overhead at night, with everyone on edge waiting for the bombs to fall.

Chief Inspector Lamb is a phlegmatic, upstanding member of the police. His biggest worry is that his eighteen-year-old daughter, Vera, is an air-raid warden in a small neighboring town. She is independent, spunky, and insistent on her right to be an adult. Even when a bizarre murder not related to her occurs, Vera still occupies Lamb’s thoughts.

A witch lies dead, his body perforated by a pitchfork and a scythe. At least Will Blackwell was rumored to have been a witch. Mostly, he was a recluse, with not much to his name. He was cared for by his niece and worked sometimes for a nearby neighboring farmer. There wasn’t much going on in his life and much too much going on in his death. What could he have done to incur such enmity?

Stephen Kelly’s book moves slowly through the process of uncovering the life of a small village to find what Blackwell’s connections were to other residents. Does his death have anything to do with the death of a young woman almost a hundred years ago, the subsequent disappearance of his niece, or a young, almost-mute boy who wanders freely and stealthily around the countryside?

More to the point, is there a current threat to young women? What about Vera? She has met a young man, Arthur Lear. He has lost an arm in the war and it has made him hesitant and too self-aware. Is there any reason why Vera can’t establish a relationship with him? Is she in jeopardy living alone in a small and somewhat isolated town.

Bombs are exploding all around, not all of them dropped by planes.

Kelly has developed some intriguing characters. Although Lamb is not on the frontline of this war, he has his own demons from the last war to end all wars. He loves his family and is more than competent at his job. Even after an old acquaintance is placed under his command under less than auspicious circumstances, Lamb perseveres. There is more at stake than discomfort caused by something that happened in the past.

A good read, even if the conclusion is a bit expected.

Posted by Barbara Tom at 7:45 PM No comments:

The Late Show by Michael Connelly 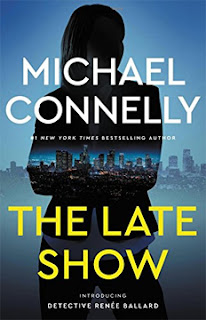 Did the police cleverly nickname one of their shifts, or is the sobriquet, “The Late Show,” Michael Connelly’s invention? I know I could look it up on Google, but let’s pretend it’s the old (old, old, old) days before instant information gratification was possible. I’m going to say that in the past Connelly has shown a talent for meticulously grafting his fictional stories onto authentic police procedures and cases. So yes, my choice is that this is a clever nickname for the late shift wryly chosen by the police.

A new character jumps to the forefront in Connelly’s latest book. Renée Ballard takes her place alongside Harry Bosch and The Lincoln Lawyer as a quirky, by-her-own-rules, smart detective. Of course she has run afoul of higher ups, because this is Michael Connelly. Ballard has been “demoted” to the late shift, but she inadvertently begins to thrive.

It’s less about the crimes for me than about Ballard’s personality and backstory. The intriguing introduction to Connelly’s main character’s personal life begins on the beach after an intense shift. After paddling around in the ocean and playing with her dog, Ballard zips herself into a tent on the sand and snoozes. A friendly lifeguard keeps a watchful eye on her. Her dog, Lola, is trained to guard, and she remains vigilent while Ballard sleeps as well. From there, Connelly unveils even more unusual elements of Ballard’s life.

The crimes are about a stolen bank card, a brutally beaten prostitute, and a nightclub shooting. Ballard and her partner are supposed to sign off on their nighttime incidents and pass the cases on to the appropriate day team. Ballard is no longer significant enough to be considered part of a high-profile crime team, but she manages to insert herself into all these cases nevertheless. It is her curiosity, experience, and intelligence that make her a valuable, if under-appreciated, member of the force.

Connelly’s machine gun style reaches a peak in this book. It’s the way he manages to deal with three crime stories and a personal tale, and not exceed a thousand pages. I often wished for a more poetic flow, a more writerly style, but Ballard is a great new character. The crime stories piled a lot of details onto readers’ plates. Keep notes.

Raised in a bookstore ... 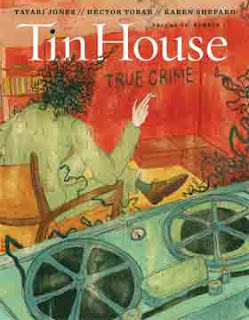 Jordan Foster is the daughter of MBTB's store manager. I would say former store manager, but in our hearts MBTB still exists, although the doors were closed many years ago. (Sob!) Jordan spent many, many days in the store, reading, reading, always reading.

Beginning when she was four years old(!) to adulthood, Jordan has been surrounded by crime books. She was precocious then, and now she can run conversational rings around anyone on the subject of crime. She has written about crime, is writing about crime, and has met and mingled with the creators of both tragic and comic criminous stories.

Congratulations, Jordan!
Posted by Barbara Tom at 3:19 PM No comments:

Under an Orange Sun …

Someone set off a firework. And now a beautiful forest is burning. It’s threatening Oregon’s iconic Multnomah Falls. The haze in the air makes the sun orange. It’s pretty. If you don’t think about why the sun is orange. There is ash falling on us from fifty miles away. The air smells like you want to get out your s’more makings. If you don’t think about why it smells like a campfire. It’s best to stay indoors, read, and occasionally rail against stupidity.

Here are two books that kept me company.

Mightier Than the Sword by K. J. Parker

Subterranean, 136 pages, $40 (a collectible edition only for now) 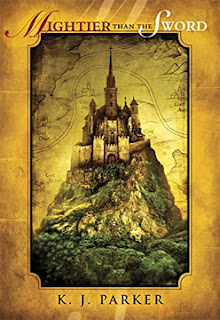 Fantasy fans probably discovered K. J. Parker decades ago. His first book appeared in 1998 (“Colours in the Steel”). After seventeen years, it was revealed that he is really British author Tom Holt. I’m sorry to say that I had to serendipitously stumble across K. J. Parker and have never heard of Tom Holt. But after I began reading his biography, I learned that Holt is the son of Hazel Holt, the author of the Mrs. Malory cozies that MBTB carried on its shelves forever.

“Mightier Than the Sword” is not a murder mystery in the traditional sense, but there is a bona fide mystery that lies at the heart of the story.

It’s the Middle Ages and a “game of thrones” is about to happen, as an emperor lies dying and the successor-aspirants are many. Wait, you say, “emperor”? Middle Ages? It’s fantasy. It’s comparable to the real Middle Ages in terms of clothes, food, castle construction, war, monasteries, monks bent over copy desks. But the geography is Parker's invention.

Worthy of note: There are no zombies, dragons, incest, magic, direwolves, or obvious dwarves.

An unnamed main character, a representative of his aunt and uncle, the empress and emperor of the realm, undertakes a mission on behalf of Their Highnesses. Pirates are raiding monasteries up and down the coast. They are killing everyone and burning the monasteries and attending villages to the ground. Some of them are poor establishments, so it’s not clear what the goal of the pirating is. That’s the mystery.

The tale is told with panache and humor. “Unnamed Hero” is gallant, brilliant, and flawed. Since this is a first-person tale, “Unnamed Hero”’s wry humor comes shining through. This was a short, enjoyable tale, albeit a little expensive at the moment.

P.S. It features one of the most briefly described major battles in the history of writing.

The Shape of Water by Andrea Camilleri
Translated by Stephen Sartarelli 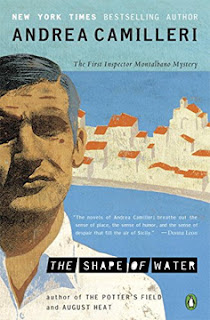 Those in the know have known about Inspector Salvo Montalbano since 1994, if they read the series debut, “The Shape of Water,” in the original Italian, “La forma dell’acqua.” It’s been in English since 2002. Sicily has never been grittier.

Montalbano is one of the few honest cops, Camilleri would have you believe. So he is the one who is called when a potential political brouhaha emerges after the adventurous death of a politician. He was found with his pants down in a car in The Pasture, the local remote hangout for whores and their clients. The politician’s widow knows about her husband’s little l’amores, but she claims he would never be so indiscreet as to visit The Pasture.

Montalbano must determine why and how the politician died, and in the process we get a glimpse of Sicilian life, humor, compassion, and double-dealing.

There’s an eh-so-what? tone to some of the goings-on that a reader might not find in a book written by an non-Italian author. Or at least it would be presented differently. (Thank goodness, I am not being called to rigorously defend my lazy, presumptuous statements.)

There are currently twenty-two books in the Montalbano series, most of which have been translated into English.