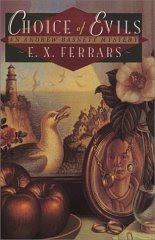 In a lull between new books that called my name, I checked an old E.X. Ferrars mystery out of the library. I thought I'd read everything available by her long ago, but had somehow missed Danger from the Dead, one of the last she wrote before her death in the mid 1990s.

She wrote almost as many novels as Agatha Christie and more than Ngaio Marsh and Margery Allingham combined, and was, in my opinion, as good or better than any of the three, but she's virtually unknown today and was never read by more than the devoted few even in her heyday. Perhaps this is because although she developed two delightful series -- one featuring therapist Virginia Freer and her ne'er-do-well ex-husband Felix, one with retired botany professor Andrew Bassnett -- they only appeared infrequently among far more non-series stories that were nonetheless equally charming.

We all have (or should have!) our "comfort reads" -- the authors we turn to when we're out of sorts or just want to curl up with something not too demanding, not too scary or intense, but not too mindless either. Something to gently engage our attention and emotions. E.X. Ferrars is just the ticket. And like the best comfort reads, she often throws in a little armchair travel as well, whisking the reader away to a quaint English village or exotic European locale. Best of all, for me, almost all her characters are both familiar and likable, with just enough of an edge to make them interesting. Just the people to gather round you on a gloomy December day.

Because she has had only a limited paperback publication and has been out of print for years, we have only a very limited stock of her books at the store. But we can special order three of her better books for you, $15.00 each, that you can pick up at the store or have mailed to you:

A CHOICE OF EVILS

A HOBBY OF MURDER
Posted by Jill Hinckley at 11:36 AM No comments: