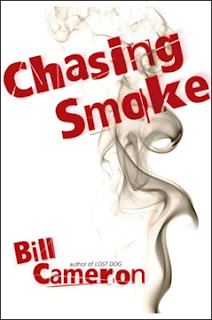 Portland author Bill Cameron has a couple of interesting gimmicks in his latest book. His protagonist is nicknamed "Skin" because of a disfiguring birthmark on the side of his neck. As a middle-aged police detective who is used to handling whatever situation comes along, Skin Kadash finds himself helplessly facing bladder cancer and all its attendant indignities. Cameron gives his character a bite and portrays Skin's struggles with cancer in an open and graphic manner.
Skin is on disability leave but is called in by his former partner to review the apparent suicide of a man who, as it turns out, also has cancer. Soon there are a couple more cases that may be related, all involving men who have cancer. Is it what it appears to be at first tragic glance: men with terminal cancer who have taken the quick way out? Or is someone helping them?
If Chasing Smoke were a hard-boiled egg, it would be petrified. Graphic language, scatological metaphors, Skin's agony likened to a rat gnawing at him assail you in almost every paragraph. But Cameron's best written stuff is elegiac rather than gruff: "…[D]eath is a thing owned by the living more than an event that happens to the dead. It's fraught with expectation, drenched in ritual, rife with uncertainty. We each own a piece of it when someone dies."
Cameron places his book vividly in a Portland that would be very recognizable to its residents. (Some of the action takes place not too far from Murder by the Book!)
Cameron's plot takes a sensitive subject, gives it the requisite mystery twist, peppers it with excretory invective, and pops out an entertaining and solid read.
(Murder by the Book is pleased to host a signing with authors Bill Cameron and Eric Stone on Wednesday, November 12, at 6:30 p.m., 3210 S.E. Hawthorne Blvd., Portland.)
Posted by Barbara Tom at 7:40 PM