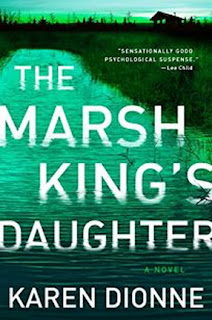 At one point I was racing through the book so fast, I lost track of the story’s timeline. I had to go back and reread a couple of pages. I resented that. I didn’t want to waste an extra minute getting to the end. That’s the kind of book “The Marsh King’s Daughter” is.

Here is some basic information. Helena Pelletier is 28 years old in the main story. She was 12 years old when she and her mother ran away from her father, Jacob Holbrook. I can’t be certain — I made no note — but I don’t think Helena’s mother’s name is mentioned once. She was 16 years old when Jacob kidnapped her. She gave birth to Helena a couple of years into her captivity. Helena now has a husband and two daughters, Iris and Mari.

Let’s flesh that out a bit.

Jacob held Helena’s mother prisoner in a marshy area, a naturally isolating environment, for 14 years. Jacob added the finishing touches by psychologically intimidating and physically abusing her. Jacob raised Helena to be his “Little Shadow.” She learned to hunt, fish, trap, track, and survive in the brutish environment of Michigan’s Upper Peninsula. She also learned to shoot and gut her prey. Jacob set severe challenges for Helena to meet, and the punishment for failure was a honking big serving of Jacob’s version of tough love.

What Dionne does so well, besides present a refreshingly novel view of victimhood, is describe her protagonist from two different angles: Helena in one storyline is the child and in the current storyline the mostly socialized young mother of two young girls. Dionne reveals early on that Jacob was eventually captured and imprisoned for many things, not least of which is the mother’s kidnapping and rape. As the story begins, Jacob has somehow escaped from a maximum security prison. No one knows him as well as Helena, so she becomes his most effective and vigilant tracker.

The intensity level is high. Descriptions of survival in the U.P. seem authentic. But what do I know? I have electricity, a lot of salt, and neighborhood stores.

I appreciate that Dionne answers all questions. What happened to Helena’s mother? How did Helena get from the “jungle girl” mentality of someone who lived in isolation from other people to a functioning wife and mother in a town setting? How does Helena feel about her father? (Hint: She has never visited him in prison.) (Actually, that may be less of a hint and more of a red herring. Sorry.) What does the name Rambo mean? Was Jacob just making stuff up? What is the Grimm fairytale of the Marsh King’s Daughter, anyway?

This most emphatically rates an MBTB star!
Posted by Barbara Tom at 9:39 PM