Y Is for Yesterday by Sue Grafton 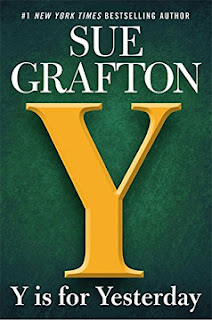 All of Sue Grafton’s Kinsey Millhone books are blasts from the past, since Grafton has steadfastly refused to budge from the 80s (until the end of “Y Is for Yesterday”). This book is even more blastworthy as the story also wanders back to events in 1979.

The main story of “Y” concerns the release from prison of Fritz who, as a teenager, shot Sloan, a fellow student at an expensive private school. There were other teenagers involved, including the sadistic ringleader, Austin. Some of the other teens have had to pay for either their conspiracy or their silence at the time, except for Austin. He was gone, gone, gone before the debts were called in.

Fritz was dealt the most severe sentence. At the age of twenty-five, he is finally being released. Luckily, his family welcomes him back, but Fritz appears less than gracious. He merely wants to pick up with his high school friends again, doing things 17-year-olds like to do. But time and his friends have marched on.

The lowest blow comes almost immediately after Fritz' release when an extortionist demands $25,000 from his parents or he/she will send a certain videotape to the police. The tape contains scenes of Fritz and other boys in his group either raping or being complicit in the rape of a young girl. Who would know about the tape except for someone from the group of Fritz’ so-called friends? That’s when Fritz’ parents call in the services of Kinsey Millhone, a private investigator in Santa Theresa, California.

Although Kinsey accepts the case to find out who the blackmailer is, she is still dealing with fallout from one of her last cases. A deadly serial killer of young girls was never caught, and he is looking for the trophies he collected from his victims. One or another of his ex-wives holds the clue to this gruesome assortment, and it is Kinsey’s job to make sure the killer, Ned Lowe, doesn’t add his wives or her to his kill list.

So there are three stories here. Besides the storylines of the blackmailer and the serial killer, Grafton has added a third-party narrative of the events in 1979 which resulted in Sloan’s murder. The story of the serial killer is riveting, especially for those who read “X.” (In her impeccable fashion, however, Grafton gives her readers enough information that it is almost unnecessary to have read the previous book. But why would you bypass “X”?) The story of tracking down the blackmailer is workmanlike. Grafton and Kinsey cross the t’s and dots the i’s. Still, to my mind, it’s not a particularly compelling teenage story. All the teens are dopes. Compared to the warmth and humor of Kinsey’s first-person telling, the 1979 story seems colorless, narrative for narrative’s sake.

Nevertheless, in keeping with my promise to star all Grafton’s remaining Kinsey Millhone books, here’s an MBTB star for “Y.” In fact, I tremendously enjoyed the roles of homeless Pearl and Killer, the dog. I continue to love landlord Henry and his eccentric family, Rosie and her awful offal, and the nasty-sounding peanut-butter-and-pickle sandwiches.

P.S. For all of Kinsey’s training in assertive self-defense, she still seems sort of helpless and reliant on the serendipitous proximity of others. I’ve resigned myself to her as an intellectual P.I., more brains and pathetically fewer brawn. (Too much Wonder Woman and Black Widow movies!)