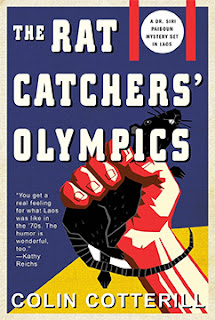 Ah, I do so love a faraway story told with humor, philosophy, ghosts, 1980s Laotian Communists, and rat catching.

Maybe some of you remember the 1980 Olympics, the one the United States shunned. The U.S.S.R. had invaded Afghanistan in 1979 and President Jimmy Carter boycotted the Olympics, which were being held in Moscow in 1980, to protest. It was also the first year Laos participated. In real life, no medals were awarded to Laos.

Colin Cotterill has used the 1980 Olympics and Laos’ first participation in Olympic sports as background for his twelfth Dr. Siri Paiboun mystery. Why would the Laotian team need its own doctor, the doctor’s wife (an ex-spy), a nurse, an old military man, and an even older military man, all of whom are non-participants in the sports? The U.S.S.R., in putting on a good public face, presented to the Olympic crowd the latest in technologies, bountiful presentations of food, stellar buildings for the events, and smiles upon their faces, despite being a country whose economy was hovering in the no-fly zone. And, presumably, they have a crack medical staff.

Siri used a devious and clever trick to include himself as a member of the team. (I will let you discover what he did.) He deviously and cleverly managed to include his wife, Daeng, the one with the tail that wiggles when she is excited. The mission was headed by his friend Civilai, who thought he could leave the country without Siri being the wiser. Like that would ever happen. Also included on the support team is Dtui, once Siri’s nurse/assistant when he was the country’s only coroner. Siri retired and Dtui went on to more important jobs, but their friendship remained strong. Inspector Phosy, Dtui’s husband, had to remain in Laos to take care of their young daughter and to, you know, do police things.

Siri has always, it seems, been able to see ghosts. Lately, the thin window between now and the hereafter has thinned even more. Now Siri has two “spirit guides,” a thousand-year-old shaman and Bpoo, a “fortune-teller transvestite.” * Siri even disappears into the hereafter every once in a while to converse with the spirits, who manage only to confuse him with metaphorical visions. Daeng used to be concerned with his disappearances, but now she considers it part of the joy of living with Siri.

What could go wrong in such a tightly controlled environment as the Olympics in the Soviet Union?

Civilai spotted an old acquaintance while waiting for the plane to Moscow. He appeared to be a member of the team, so Civilai was looking forward to reminiscing. However, his friend never made the trip. The mystery of what happened to his friend leads Civilai to involve Siri and Phosy, and the three of them seem to uncover a plot to assassinate someone in Moscow.

Siri and his friends must uncover the secrets that hover over their group, while maintaining Laotian solidarity in cheering for their Cinderella athletes. Will one of them magically place as a shooter, a boxer, a runner, or a race-walker? Unlikely. But the cheerleading gang is determined to celebrate their unexpected good fortune and Quixotic expectations by being the loudest people to celebrate not winning a medal.

Colin Cotterill twists and turns his characters throughout the Olympic venue and the politics of Laos and the U.S.S.R. Cotterill, as usual, presents a delightful story filled with quirkiness and heart. For the pleasure Cotterill brings his readers, an MBTB star, of course!