Himself by Jess Kidd 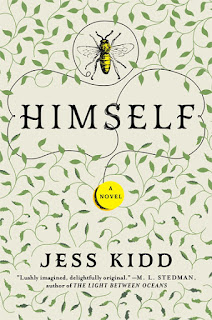 “Himself” is a very unusual murder mystery. For one thing, there are tons of ghosts drifting by in the background of this story set in 1950 and 1976 in the Irish village of Mulderrig, County Mayo. The central murder happened in 1950, and in 1976, the son of the murder victim comes back to the town of his birth to find out what happened.

Orla Sweeney was 16 years old when she gave birth to Francis Sweeney. She was murdered soon afterwards, perhaps by the father of her child. Francis was spirited away from the scene of the crime.

Twenty-six years later, Mahony — just Mahony — purposefully drifts into Mulderrig on an unnaturally hot day in April. Nothing that happens after his arrival can be said to be natural. Mahony can see dead spirits. He has learned to operate as a “normal” through their often inopportune appearances. Besides that, his appearance has triggered some sort of seismic supernatural activity that builds to a cataclysmic crescendo. But before that, “Himself” is bracingly charming, poetically musical, wittily Irish, decorously lusty, wonderfully drawn.

Women fall for Mahony in a big way. Men are charmed by him and forget to envy him. The first two people he meets are barkeeper Tadhg (as far as I can tell, it’s pronounced “Tig,” like the first part of “tiger”) and garda Jack Brophy. They direct him to a place to stay: Rathmore House, the run-down mansion of Shauna Burke and her father, Desmond. Another “guest,” Mrs. Merle Cauley, is a faded actress with a commanding presence. Soon Mrs. Cauley and Shauna are drawn into helping Mahony with his task of locating his mother’s killer. Indeed, there is no need for suspense, Mahony is Francis Sweeney, come back to life in Mulderrig.

Add the following characters: pinched-face widow and ex-nurse Annie Farelly; Bridget Doosey, a woman of many useful talents; Tom Bogey, the creepy forest bogeyman; Father Quinn, the tight-arsed priest who replaced the beloved Father Jim; and the oracular Mrs. Lavelle, the village crazy (or is she?). These characters and more are half-way between real people and over-drawn eccentrics. Jess Kidd’s talent is the fine tone she takes and balances throughout her novel of half-way between realistic and way-out-there eccentric, until, of course, it is full-blown weird. Magical realism on steroids?

Let’s hear from Kidd herself.

On the name Francis Sweeney: “After all, it’s a dead name, a name never taken, a life never lived. This town took it from him. He won’t forget that.”

Here’s Mrs. Cauley after the team (she, Mahony, Shauna, Bridget) has done some investigation: Orla “was seen leaving town walking in five different directions while simultaneously boarding the bus to Ennismore, with and without a suitcase, a vanity case, a baby, and a pram. All in a day when there was no bus to Ennismore because Bridget Doosey was lancing a boil on the bus driver’s arse.”

Here’s Mrs. Cauley on the dead: “You underestimate the dead you know. They hang around the place, don’t they, watching, haunting? That makes them prime witnesses in my book.” And later, here’s Mahony on the dead: “The dead are just echoes of the stories of their own lives sung back in the wrong order…”

The dead are characters with their own ambiguous viewpoints, none of which seem particularly helpful to Mahony. But the dead never includes Orla. Could she still be alive, even though the book opens with her supposed death? Besides Mahony, Mrs. Cauley and Mrs. Lavelle also have strange abilities. Despite the marshaling of spirits and supernatural powers, the heart of the story is about love. But it is also about a vicious killer who hides in plain sight.

The ending was a little rich in comeuppance, but I treasured every word of this book. A most resounding MBTB star!