The Dime by Kathleen Kent 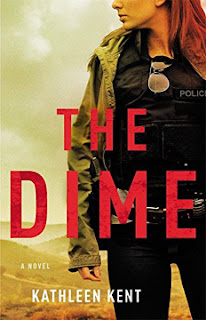 One of the delights of “The Dime” is learning the derivation of the title. But that’s just one of the treats Kathleen Kent disperses throughout her novel.

“The Dime” starts out with a whiz-bang moment when rookie cop Betty Rhyzyk is called to a shooting that goes south very quickly. She is all that stands between a really bad situation and a FUBAR. That happens in Brooklyn, land of her birth and home to generations of Rhyzyk cops.

Jump ahead a few years and half a country away to Dallas, Texas, and Betty is still a cop, but this time with narcotics. Her most recent case would stay within the purview of narcotics, except for the dead bodies. Betty is in charge of the unit that is setting up to take down a big time Mexican cartel drug dealer. What’s the opposite of kismet? Is it FUBAR? Betty is already acquainted with that. This book is about how Betty deals with things when they go south. Nothing would suggest that she is not up to the task.

Betty is almost six feet tall with luxurious red hair. Not surprisingly, “Red” is one of her nicknames. She has gained wary respect from her colleagues because of her calm, cool and collected manner and her toughness. Let’s dispense with the she’s-tough-for-a-woman or he’s-sensitive-for-a-man qualifiers. Kathleen Kent has created a character who exists in her own space.

Betty’s quest to plug up some of the drug problems plaguing Dallas soon infringes on her personal life. Her girlfriend is a native Texan, the reason Betty relocated there. Betty and Jackie have enough trouble with her family’s prejudices and the homophobic atmosphere they frequently encounter, they really don’t need to be playing hide-and-seek with the cartels.

Kent charges through her story with fast-paced action and solid characterizations. From the dead uncle whose advice Betty still channels to the grumpy colleague who constantly busts her chops, Kent makes the surrounding personnel three-dimensional with just a few strokes.