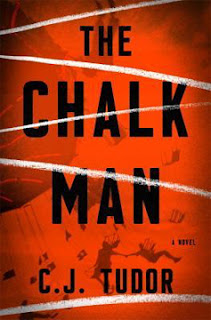 Whoa! “The Chalk Man” is an impressive debut by British author C. J. Tudor. She takes well-used suspense tropes and twists them around. The result is a surprising story.

Tudor’s “heroes” are a group of twelve-year-old kids in the town of Anderbury, England. (With its quaint parts, dicey parts, pub parts, and foresty parts, Anderbury sounds so British. Queue up Midsomer Murders.) Eddie Adams is the narrator. His buddies are Fat Gav, Metal Mickey, Hoppo, and Nicky (a girl). In a story reminiscent of Stephen King’s “Stand By Me,” the kids range through deep and dark woods, bicycle to each other’s homes, and work out a secret code to communicate. Several tragedies, including finding a dead body in the woods (you knew that would happen), hit them and their town.

There are two stories: one when the kids are twelve and the other thirty years later in 2016. The tragedies of 1986 are revisited in 2016 when a grown-up Eddie reconnects with Metal Mickey after not having seen him in years. That reunion sets more deaths into motion.

In 1986, Eddie and his friends are at a traveling fair. One of the amusement rides breaks and comes crashing into the crowd. A beautiful girl whom Eddie had been admiring is one of the victims. The newly arrived and exotic looking Mr. Halloran (an albino!) enlists Eddie’s aid to help save the girl from bleeding to death. Although they were strangers before the incident, Eddie and Mr. Halloran form a strange bond. They are destined to affect each other’s lives over the next few months.

The kids communicate by drawing chalk stick figures. They use different colors to indicate the sender. Suddenly, chalk is being used for something more malevolent than childish secrets. Eddie begins having nightmares in which he sees ghosts of the recently deceased. The dreams have a somber, menacing tone. Sometimes Eddie finds dirt and leaves in his house, open doors, rank smells. Remnants of the walking dead?

Tudor does a fabulous job of showing both the comfort of friendship and the creepiness of the setting. There are kid secrets and adult secrets, any of which could blow up, some of which do. Tudor creates so many possibilities without making her story impossibly complex. Tudor also is great at creating forward momentum. You want to turn that page. And the next page. And the next. Also, all her characters have psychological fiddly bits that will engage you.