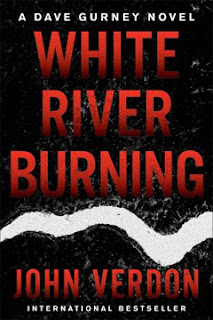 I love the dramatic title of this book, “White River Burning.” The fictional town of White River is set in upstate New York, and it is burning because of race riots. The situation may become even more combustible if the murders of two police officers and two African-Americans are not solved. Call in Dave Gurney because he’s, you know, Dave Gurney. I guess “Newark (No, Not the One in New Jersey; The One in New York) Burning” just doesn’t have the same ring.

John Verdon’s books are thorough, thought-provoking, intelligent, clue-laden, psychopath-laden, and entertaining. “White River Burning” is the sixth book in the Dave Gurney series. It is remarkable that Dave survives his cataclysmic adventures. I also tune in each time fully expecting the faithful and gentle Madeleine, his wife, to come a cropper or die. Surely, I think, in the course of these intense adventures, one or the other will not survive. Madeleine is mostly a spectator and solid shoulder for Dave to lean on. But it wasn’t always so. She’s had her share of close calls and been more of a cold shoulder occasionally. Their relationship is the solid base now from which Dave can travel into scary/crazyland.

After a police officer is shot by a sniper at a demonstration protesting the death of a black man at the hands of the police (#blackwhiledriving), Dave is called in by the nervous District Attorney, Sheridan Kline, to do some investigation. Dave has been retired from the NYPD for a while, mostly so he can give his obsessive nature a rest and save his marriage. He was a much lauded investigator and cleared a high percentage of his homicide cases. (To Verdon's credit, he shows Dave's method.) Having just put his most recent case to bed ten months earlier, he reluctantly agrees to help Kline.

There are many, many names in this book. Here, you can use the following as a reference:

There are more. Many more. Some of them have obsessive-compulsive tendencies. I think Verdon must have meticulous habits himself to create such a complex tale and draw all the skeins together. And it’s not just Verdon’s storytelling that is first-rate, but also his vision of why good people must exist and why they must persist to save humanity in whatever small or large ways they can. Dave is a person to follow to the ends of the earth.

So all Dave has to do in this novel is find out who is targeting cops, quench the rioting, determine if there is corruption in the police department, keep the case out of the feds’ jurisdiction, find out who killed two black men, maybe track down two crazy white men with a lot of dynamite, and check to see if all of these far-flung cases are related.

I loved it. (Even though I wondered what happened to Steele’s second phone that he apparently had hidden. And even though it was obvious one of the potential miscreants was trying to seduce Dave and he should have dragged Madeleine along to their meeting.)

Verdon once more reminds us that Dave looks like Daniel Craig. Yes, I hope Verdon gets a movie deal and Daniel Craig plays Dave. If not Craig, then the actor must evince a stone face and convincingly shoot from the hip, to pile on the cool-hand tropes. That’s not asking too much.