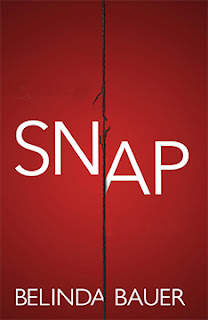 Belinda Bauer could teach a master class in how to plot the unexpected. She takes every cliché and trope and trashes them. You think you know where Bauer is going because you’ve read sooo many crime stories, but you really don’t. You shake your head at what seems to be an obvious mistake or easy way out that Bauer has taken, and it turns out you are the one who deserves the head shake.

In “Snap,” Bauer gives center stage to Jack Bright, a fourteen-year-old in Tiverton, England. Three years earlier his mother was kidnapped and murdered. His father fell apart and deserted Jack and his two younger siblings. At a tender age, when Jack should have been playing video games and carousing with mates, he had to assume responsibility for his siblings so they wouldn't be put into care. He tells nosy neighbors that his dad travels a lot. He has burgled over a hundred homes to get healthy food, clothing, and other necessities for his sisters. He takes his anger out on the furniture in those homes. He frequently falls asleep in their beds. He has been nicknamed “Goldilocks” by the police, who have no idea he is a kid.

Meanwhile, Catherine While is a pregnant woman. Her home is burgled and she finds a knife by her bedside with a creepy note attached: “I could have killed you.” She doesn’t tell her husband, Adam, because, because … she just doesn’t.

Meanwhile, Detective Chief Inspector John Marvel has run afoul of the Metropolitan Police in London and has been reassigned to the backwater — by Marvel’s lights — city of Tiverton. Instead of homicide cases, Marvel finds himself enmeshed right off in a police scheme to capture Goldilocks, a case much beneath his dignity. Furthermore, he is benighted — again, by his lights — by the pompous, preening Detective Sergeant Reynolds and (the very normal) DC Rice, a woman who tweaks all Reynolds’ ideas of proper procedure. Bauer does an admirable job of fleshing them out as very different characters.

Bauer brings her stories together early on, but it is unclear whether the relationship between the stories is on solid footing or dangling from a spider’s thread. Did Jack burgle Catherine? If so, did he leave the note? If so, why? How does Marvel eventually get pulled into the murder case of Jack’s mother? You can envision Bauer thinking through this outline and then gleefully rubbing her hands together as she decides what to reveal and when.

Bauer excels at poignant endings. She arms the tender and vulnerable with weapons of intelligence and luck. Fortune favors the bold and the persistent. Fortune favors Bauer.