The Current by Tim Johnston 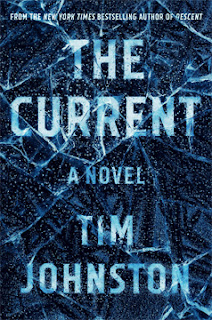 “The Current” poses a lot of questions. Whether Tim Johnston answers them depends on what his readers will discern from his words.

Audrey Sutter is the nineteen-year-old daughter of a man dying of cancer. She leaves college to travel back to her home in Minnesota to see him, maybe for the last time. Although they did not get along initially, Audrey has become fast friends with Caroline, her original roommate in the dorm. They parted ways right away but then the vagaries of fate entwined them once again, only this time the bond was not based on shared accommodation but on shared interests and a deep liking. So Caroline offers to drive Audrey home, far from their college and far from her hometown in Georgia. It’s winter, there’s snow and ice, and it’s a preposterous journey for two young girls to be doing on the spur of the moment.

There is an incident at a gas station and the girls speed away in Caroline’s car. The car crashes down an embankment and spins out onto an ice-encrusted river. Johnston writes one of the most thrilling and haunting scenes of the two girls suspended on top of the possibly very fragile ice. The next time Audrey makes an appearance is in a hospital.

Audrey is not just any girl. Her father is the ex-sheriff of her hometown. After her mother died when Audrey was very young, her father became everything to her. She hero worshipped him and he never let her down. To have him so vulnerable when he was so strong, to have him worrying over her when it should be the other way around is painful to Audrey. And the fact that Audrey believes someone purposely bumped Caroline’s vehicle onto the river adds to his frustration and her despair. Can he protect his little "deputy"? Can she protect her dad? Tim Johnston spends the whole book finding out if they rise to the task.

It’s more than just what happened to Audrey. Ten years earlier, another girl fell into the same river. She wasn’t as lucky as Audrey and she drowned. Holly Burke was about the same age as Audrey when she died. Before Holly drowned, she had been hit by a car. She had been murdered, but Audrey’s father, who was sheriff at the time, could not find enough evidence to arrest anyone.

Danny Young had known Holly Burke from childhood because their fathers were partners in a plumbing supply store. After Holly’s body was found, people suspected Danny of having something to do with it. He and Holly had been in the same bar, he had left soon after Holly, and he had been drunk. Because that was pretty much all the information that existed, Danny was never charged with anything, although, by gum, the sheriff interrogated him intensely. Not long after, Danny left town and had been wandering the country from job to job. His mother and twin brother, Marky, were left behind, heartbroken.

Then one day Danny returns. With his return arise the old questions that were never answered satisfactorily. There are still murmurs in the town about his guilt. One of the people who has never forgiven Danny is Holly’s father, Gordon. The fact that Gordon had been an old family friend and close to Danny’s mother has caused him distress over the years, but he never repaired that bridge. And now that Danny was making one of his infrequent appearances in town the old issues are raised again.

What did Sheriff Sutter know back then about Danny and Holly? What does he know now about Audrey’s trauma? He’s a sick man but he never lost the resolve to correct old wrongs. Audrey wants to acknowledge a similar courage in herself when she inadvertently comes across information that could either finally condemn Danny or exonerate him.

I’ve danced around some of the story’s plotlines because it’s so satisfying to watch author Johnston introduce them, spin them, and finely draw them. He also adds in certain spiritual, for lack of a better word, elements. Some of the characters “know” things or “see” things, without knowing or seeing them in reality. Marky is especially interesting. He is Danny’s twin but has suffered from a slowness and “otherness” from birth. Danny and his mother tried their best to buffer him from the world. After Danny left, Danny’s friend Jeff stepped up a little. Marky is still loved and protected. And Marky knows things, feels badness and goodness, knows death before anyone else. After Audrey recovers a little, she, too, feels certain things, is haunted and comforted by thoughts of young women drowning in the river. Johnston doesn’t really step over the line into woo-woo. His take on it is poetic and underlies the empathic feelings of Marky and Audrey.

Johnston is a good writer. He evokes the winter in Minnesota, the tenderness of death, and the vulnerabilities of his main characters so well. I’m going to quote something from his book. It’s not the best thing he wrote -- those would be spoilers --  but it speaks to how true his writing is:

The first time it snowed it made you happy, it made you think of being a kid and sledding and making snowmen, and Christmas and sometimes after that the snow would turn everything white and pretty again, but now the snow was just snow and the winter went on and the spring would never come.