The Institute by Stephen King 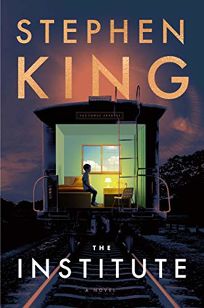 Stephen King gets people. His stories may color outside the borders, his horrors unimaginable until he imagines them, his trips loopy and crazy, but he understands people quite thoroughly. His kids, especially, are kids — until they prematurely have to make adult decisions. Although a lot of his characters are young, King doesn’t really do touchstone current idioms and pop references. Nevertheless, the psychology feels so right.

There are a lot of children in “The Institute.” Although there is a reference to “Lord of the Flies,” this is a kinder and better gathering of children. It begins with the murder of twelve-year-old Luke Ellis’ parents and Luke’s kidnapping from Minneapolis to the wilds of northern Maine.

Actually, that’s not true. The story begins with the introduction of some adults. Tim Jamieson is looking for work. He was a police officer in Florida but a Kingian-style bizarre wrong turn put him on the road to New York to find security work. On the way to NY, he “feels” right about getting bumped from a plane and hitchhiking up the eastern seaboard. His luck, good or bad, lands him in DuPray, South Carolina. He takes a job as a “night knocker” in that small town.

A night knocker, according to King, is someone who doesn’t carry a badge or a gun but walks the night shift to check on the safety of the town, mostly its businesses. He becomes one of the sheriff’s team, but without authority. It suits him fine. There’s even — boing! — Deputy Wendy to quell his loneliness.

With Tim in place in South Carolina, we can return to Luke in Maine.

Luke awakens from his drug-induced stupor in a room very much like his own. Except for the absence of some small details — like windows — it IS his room. When Luke opens his door, he sees a dormitory hallway. That leads to a bunch of kids. They greet him and explain that he is now a captive. Abandon hope, etc. Prepare for Nazi-style shots, shocks, experimentation, and physical and verbal abuse. The goal of the adults who run The Institute is not to kill the kids but to measure them and turn them into ... what?

When Luke is upset or anxious, he can move things, small things. Telekinesis. TK. Some of the other kids are also TK, others are TP, telepathic. Are the adults trying to eliminate these tendencies in the children, determine how they are what they are, or enhance their powers? King tells you that The Institute has been around since the ‘50s. The children are told they are helping their country by submitting to the various examinations and shots. Sure.

What becomes obvious is that kids eventually move from “The Front Half” to the “Back Half,” never to be seen again. New children arrive periodically. The adults tell the children that after they perform services for the group, their memory of the place will be wiped out and they will be returned to the happy bosom of their family. Luke does not know but he suspects that this is never going to happen, especially since he believes his parents are already dead.

Luke’s time in the Front Half is miserable and Dickensian. If it were not for the friendship of some of the other TPs and TKs, he would be miserable and lonely. His buddies are Kalisha, Nick, George, and Iris. They are joined by ten-year-old-going-on-eight TP wunderkind Avery. Part of Luke’s talent is he can be sociable and appear “normal.” He can charm and engage, while absorbing and calculating. Before his abduction, he was on the path to attending simultaneously both Emerson College and MIT as a twelve-year-old. He knows big words, has superior analytical skills, and can hack a computer.

How does King bring Luke, trapped in Maine, together with Tim, settling in to life in a small South Carolina town?

As I said, King does kids well. But what would be the big whoop about ordinary kids? King’s kids are mostly articulate, generous, kind, and steadfast ... and also have TK and/or TP powers. (There are even twins, which gives King a chance to make an oblique reference to “The Shining.”) Put a bunch of kids together in a dire situation, make one a leader, another a brave one, and another a catalyst, and things will happen.

Turn the pages, read a most excellent story, revel in Stephen King’s storytelling ability, put your cares aside for a few hours.
;
Posted by Barbara Tom at 11:27 AM