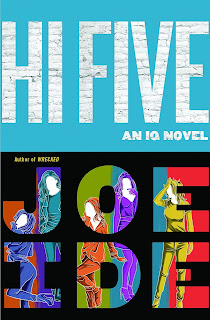 At this moment there is a lot of discussion about cultural appropriation, mostly brought on by the book “American Dirt.” At the core of the controversy is whether the author can claim a legitimate right to her subject matter despite a lack of connection to the culture depicted in her book. I have not read the book, so I cannot speak to the authenticity of what the author depicts — and I probably could not comment on the authenticity anyway, because the subject is beyond my experience or purview. Because I have not read the book, I could not speak to whether it’s a good book (IMO) either. But this discussion now hangs over every book written by an author who is not actually a genetic/cultural member of the story’s group.

Oh, boy. Can you say can of worms?

And that brings us to “Hi Five.” Author Joe Ide will make you laugh and then break your heart, and you will love him for it. He is of Japanese descent but is an American by birth and grew up in South Central Los Angeles, California, the area his characters inhabit. He grew up knowing a wide variety of ethnicities, cultures, and, if his book is any indication, food. He is not black, African-American, or a gang banger (at least not to my knowledge). But the culture of South Central LA is what he writes about. His central character, Isaiah Quintabe is black. His secondary character, Dodson, is black. His comic relief, Deronda, is black. Other characters are black. Other characters are white, (the great amorphous grouping called) Asian, (the other great amorphous grouping called) Hispanic. Also, I assume Joe Ide is not a criminal, but crime is what he writes so engagingly about.

What is my point?

Isaiah (“IQ”) Quintabe is a choice piece of literary creation. Eccentric, intelligent, streetsmart but people-awkward, IQ solves mysteries with intense focus and Holmesian procedures. Over the four books of the IQ canon, Ide has shown us a part of California held hostage by warring groups swimming in a criminal sea. IQ to me is not black — just black, only black — so much as he is a great standard bearer for the rights of his neighbors and community members to live without fear and in possession of anything they may have misplaced (purses, cats, keys). Over these four books, IQ’s life has enlarged from the world in which he lived, a life compressed by the senseless death of his beloved older brother and his own social confusion, into one in which he has a girlfriend (albeit a very different kind of person with her own difficulties), a sometimes best friend/partner, and a client-base that has grown increasingly more complex and dangerous.

There are vicious cartel members, drug lords, violent gunslingers, assassins, uneasy tribal truces, and random drive-by deaths. It is one of those drive-by deaths that begins IQ’s journey into the dark world of Southern California crime. The owner of a neighborhood bodega was shot and lies near death. It turns out he wasn’t just nice, he walked the walk: helping the homeless, shelter animals, little kids. IQ wants to track down his shooter and bring him to justice, maybe with a caulk gun or Taser. IQ doesn’t want to really hurt anyone.

Good books start from a simple premise and drive further and further into a more complex and morally ambiguous situation, if you’re lucky. “Hi Five” is a good book.

Soon IQ is involved in a vicious drug lord’s personal problems. His right-hand man was murdered while in the drug lord’s daughter’s clothing shop. Everyone is traumatized. During his interview with the daughter and her mother, IQ discovers there’s an enormous secret distracting him from the solution of the case. The deeper IQ dives, the more secrets he uncovers, and they are all unpleasant. Soon IQ’s investigation takes him into more gang territory, and the concerns are more about weapons than missing cats. The escalation is fast, furious, definitely not funny.

Joe Ide juggles all this very well. The escalation of events drives his story to a memorable and poignant conclusion.