The Long Call by Ann Cleeves 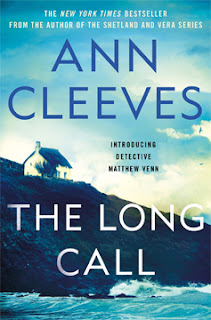 I salute Ann Cleeves for beginning a new series and not resting on her laurels! This is not Vera. This is not Jimmy. This is Matthew Venn in North Devon, England.

Matthew is a cop, a detective in the North Devon constabulary. The body of a murdered man is found on the sandy strand close to where Matthew and his husband have their home. There are little towns and villages scattered throughout the area, and Cleeves makes use of their availability to set pieces of her story in them.

Ross May and Jen Rafferty are his main assisting detectives. Ross is a newby and seen as a spy for the alcoholic, dysfunctional DCI of the station. Jen transferred from a bigger post because she was looking to escape an abusive marriage and bring her two children up in a better environment. She is a bit of a late-blooming wild child and hasn’t found her footing yet. As in her other series, Cleeves creates solid side characters with relatable stories.

The body turns out to belong to Simon Walden, an alcoholic homeless person who barged into a help center and, indeed, found help. Caroline Preece counseled him, introduced him to other aspects of facilities in North Devon, including the Woodyard community center, and gave him a room in her own home. She already had a roommate, Gaby Henry, who was wary of the arrangement. But Caroline owned the house, so there was very little Gaby felt she could say. Gaby, too, was involved in the community center as an art teacher.

In addition to counseling, Simon soon became involved as a cook at the cafe in the Woodyard. It turned out he had some talent as a chef. He got to know some of the other people who used the Woodyard, including some of the Downs syndrome group members.

So why was Simon murdered? Until he showed up, he was a stranger to the area. Slowly Matthew and his group draw out other interesting tidbits from Simon’s past, including some aspects that could explain why he was held in bad will. But did his past follow him to North Devon? Maybe. But that doesn’t explain why days later one of the women with Down’s Syndrome has disappeared. She was last seen at Woodyard, presumably catching the bus home, but she never arrived. Are these incidents related? Matthew and his team have only slender threads to tug in their investigation.

Here’s the spanner in the works: Jonathan Church, the director of the Woodyard Centre, is Matthew’s husband. These incidents and others that follow seem to revolve around the center. Is Jonathan a suspect?

Cleeves again does what she does best. She creates a suspenseful atmosphere that lightly shrouds the story in dread but doesn’t overwhelm it. The people and their relationships beam through. They don’t get lost in bright but vacuous gimmickry or thudding scenes racing to the end. Why do we love Vera Stanhope? (And if you don’t know Vera, why not?) Why do we love Jimmy Perez? (Ditto.) Cleeves makes them human.

Matthew Venn has a sad background. His parents were ultra-religious and could not accept a gay son. (To Cleeves credit, Matthew’s sexuality really isn’t a big deal. Most characters acknowledge he is married to Jonathan, without judgment.) As the book begins, Matthew’s father has just died, and he is outside the church during the service. His appearance would not be welcome by the members of the sect or his (sigh) mother. This is a dynamite set-up. And Cleeves flows with it.


Aside: At one point, in my OCD way (not really), I was ready to castigate Cleeves for not showing photos to a victim to determine the criminal. Lo and behold, within a few pages, there were the photos being shown to the victim. She does detail!

When do I not love Ann Cleeves? MBTB star!