Running Out of Road by Daniel Friedman 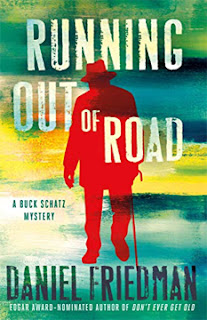 If talk of crime, philosophy, ethics, discrimination, and Machiavelli all crashed into each other, “Running Out of Road” would emerge from the collision. And it would be sublime.

There are not too many books — can’t think of one, actually ... not even close — in which the protagonist is an 89-year-old Jewish man, a retired detective from the Memphis police force, living in an assisted care facility with his wife of seventy years. He has been retired for decades, but a case he had in 1955 has come back to dog him. He can’t outrun the past even with his walker and legs in high gear.

Buck has dementia which is slowly diminishing his memory. He has to be told over and over again, each time newly traumatic for him, that his wife, Rose, has lymphoma and the prospects are grim. Also, while we’re talking about sad things, Buck and Rose’s only child, Brian, died a while ago. Buck has to be reminded of this as well. Their grandson, Brian’s son, William Tecumsah Schatz, is studying to pass the bar in New York, but he has traveled to Memphis to be with Rose for a little while. Buck dismissively calls William “Tequila.”

So Buck (née Baruch) Schatz, the retired detective, meets his moment of comeuppance in the form of Carlos Watkins, an NPR journalist. (“He sounded like the liberals on MSNBC.”) Carlos’ latest production is “American Justice,” in which he explores cases of potentially misbegotten justice. His latest focus is on Chester March, an 87-year-old man who is on death row and whose execution by lethal injection is only two months away. Chester has been preparing to die for thirty-five years. It was Buck who put him away.

William, the future lawyer, has advised his grandfather to stay away from Carlos and his radio program, but Buck would like his version of Chester’s case to be heard. Can this be a good thing for a man with dementia? It does appear that Buck has a pretty good recollection of Chester’s case ... maybe.

Let’s introduce a little timeline here. The present-day story with Buck and Carlos actually takes place in 2011. Buck originally arrested Chester for murdering his wife and a prostitute in 1955. I have given you all the information you need to do the math and discover there is a missing piece. Chester alleges he is innocent — are there any guilty men on any fictional death row? — and that Memphis Police Detective Buck Schatz beat a false confession out of him.

Ed Heffernan, Chester’s appeals attorney, has taken the case because he opposes the death penalty and not necessarily because he thinks Chester is innocent. Between William and Ed, we clearly hear author Friedman’s own lawyerly voice. (And probably what his personal opinion is about the death penalty.)

Carlos has been trying to interview Buck but because of William’s intervention, he has been unsuccessful. The episodes presented on NPR so far have been without Buck’s point of view. So Carlos’ audience has only heard Chester’s story. Chester is an articulate, educated white man, so he presents a very sympathetic character. Carlos and Chester have built a large audience of listeners.

“Running Out of Road” is a combination of Buck’s first-person narrative and transcripts of Carlos’ broadcasts. Sections set in 2011 alternate with those set in 1955 and 1976 (aww, I’ve given away the missing piece), when Buck actually managed to put Chester away.

Underlying the story of the alleged crimes committed by Chester and Buck’s hunt for evidence of those crimes is the story of systemic, invidious, and appalling discrimination. Although Buck fought in WWII and was gravely injured, he is no better than … that Jew detective. He has to be smarter and bolder and more fearless than his non-Jewish, white colleagues. The KKK is still a powerful force in Memphis and so there is that factor as well. You would think that 1955 is far enough from the Civil War that white cotton landowners wouldn’t have a superior class standing. But they do. Chester’s family is one of them.

Most appalling is the diminishment of the eyewitness testimony of a woman who saw Chester drive off with the prostitute whose mangled body was discovered later. The eyewitness is black. The bottom line: It doesn’t matter what she saw.

Carlos, the NPR broadcaster, is black. What difference does that make in his drive to complete Chester’s story? It’s complicated. Black, white, Jewish. Latent prejudices. Overt prejudices. Friedman brings it all out but it doesn’t overwhelm the story, which still manages to come in at a neat 288 pages.

This book has layers and a succinct and compelling lawyerly overlay. Author Daniel Friedman has a law degree, after all. But mostly what Friedman does so very well is bring to life an ancient soul whose life is guttering out. With compassion, Friedman also sketches Rose, the valiant and loyal wife.  Friedman also uses wry humor well.

Here’s a passage from the book. Buck is mulling over what he could have done differently over the years, now that his beloved Rose is dying and he is running hard to avoid his grim future:

“[M]aybe I should have taken more risks. Started more gunfights. Maybe smoked more. It takes a lot of nails to pin a beast like me into a coffin, but I could have found my numbers. An extra half a pack a day, maybe, and I could have been dead thirty years ago.”

The book begins with Buck in a doctor’s office wondering who the doctor sitting across the desk is. His mind has drifted off while the doctor was talking.  Was the doctor talking about his dementia, his frailty, his smoking, his heart, his … oh, any number of things? But, no, he is being told, again, that Rose has cancer. And his heart breaks, again. Friedman continues to break Buck’s heart and ours throughout the book.