The Cabinets of Barnaby Mayne by Elsa Hart 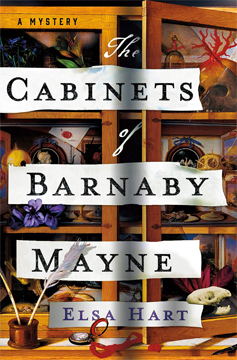 Boy, howdy (to borrow Craig Johnson’s favorite phrase), do I love Elsa Hart. Her three-volume Li Du series set in ancient China was a winner. Now, she presents us with a mystery set in a more recent time and a different place, England in 1703. Her new detective, or detectives, rather, are middle-aged women, Lady Cecily Kay and her childhood friend, Mrs. Meacan Barlow.

What would draw Lady Kay, newly deposited on England’s shore after many years away, to the cluttered rooms of the London mansion of Sir Barnaby Mayne, the famous collector of … well, everything? Cecily is married to a man with the British consul in Smyrna, but she has left her husband behind and is now tarrying in London. While in Smyrna, she collected unusual plants. Some of them are unidentified, so she has acquired an invitation to riffle through Sir Barnaby’s large dried plant collection, with a view to identifying those pesky specimens of hers.

While at the mansion, Cecily runs into an illustrator who is working for Sir Barnaby. Astoundingly, it is a childhood friend whom she has not seen in decades. They warily renew their acquaintance and together meet other occupants of the house: Walter Dinley, Barnaby’s curator; Otto Helm, a snake specialist from Sweden; and several mysterious household staff given to botany, dusting, and blackmail.

Others soon join the list of suspects, for that is what they all will soon become when someone murders the esteemed collector Sir Barnaby Mayne in his own study, no less, and while the house is teeming with guests.

Several other collectors and curious individuals have arranged to take a tour of the extensive collection covering just about anything that can be sized, cataloged, displayed, and labeled. They are Humphrey Walbulton, a man who obviously appreciates himself, perhaps more than others appreciate him; Dr. Giles Inwood, a medial doctor and solicitous friend of Sir Barnaby; the beautiful Miss Alice Fordyce, who apparently doesn’t need to be anything else; and Martin Carlyle who fades into the surroundings with his innocuousness.

It’s as good as a locked room mystery. One of them must have murdered the good Sir. With nary a police detective in sight, Cecily and Meacan, whose motives Cecily has yet to determine, take it upon themselves to answer the questions no one else is asking. Could it be because they don't believe curator Dinley's gasping utterance when caught in flagrante: “I killed him”?

Thank goodness Cecily doesn’t take those words at face value or we wouldn’t have a story. A woman alone (and even with another woman) wandering around London, accosting men of high and low birth for information might have had a different storyline, but thank goodness, Elsa Hart has everything in hand and we have a rather pleasant soft-boiled mystery.

And we have writing like this, in which Hart describes the ludicrous thought that Dinley might have actually murdered Sir Barnaby, to enjoy as well: “The same man who apologizes to furniture when he bumps into it?”

I think this is the birth of a new series, because in the best cliffhanger fashion, Hart leaves a tantalizing clue about Cecily’s next adventure. Can’t wait.