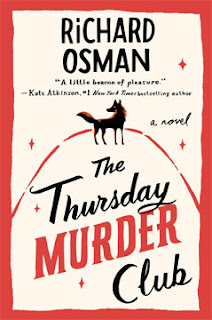 I can’t remember the last time I read a book and immediately wanted to read it again. I did not want to be parted from the members of the Thursday Murder Club.

Retirement villages are not just for old fogies anymore, especially the luxurious, cozy retirement village of Coopers Chase, England. Yes, “The Thursday Murder Club” is indeed a cozy. But it’s one with a bite and wit and compassion and all sorts of good things.

Mostly the book is told in the third person, but some of it is through a diary written by the newest member of the Club, Joyce. The old stalwarts are Elizabeth, Ron, and Ibrahim. The group was begun by Elizabeth and another resident, Penny, but as is the way with all things, Penny is getting ready to say her final goodbye to the world. Penny lies comatose in a nearby care facility attached to the more active retirement community where the other members live. Penny was a DCI when she was at home. Naughty copper, she copied her old unsolved case files, and she and Elizabeth got in the habit of trying to solve them. After Penny suffered a series of strokes, Joyce was asked to join the group.

The members bring unusual skills and interests to the group. Ibrahim was a psychiatrist. Joyce was a nurse. Ron did a little of this and a little of that, some of which may have crossed over the line. You know, THAT line. And Ron, too, may be fading out a little in the upstairs department. Elizabeth is the true mystery. There are many broad hints that she was MI6 and “solved” problems for them, in the most genteel and diplomatic way, of course.

The members, who are also maybe friends, are happy with their hobby and are totally and utterly prepared for the day when someone drops dead on their own patch. Actually, the first person — squeal, yes, there is more than one dead body — was a part owner of the village development and he dropped dead in his own home a little piece away.

Oh, the dead bodies! Oh, the delightful (and poignant) secrets! Oh, the characters so dear you want to squish their cheeks.

The most outstanding feature of this novel is the humor. Mostly I smiled, but once I guffawed. (I didn’t even know I could guffaw.) Here are some tamer examples.

The group is introducing themselves to PC Donna De Freitas. Donna is trying desperately to get into her precinct’s Murder Unit, but so far the only things to come her way are community safety talks, purse snatchings and tea orders from the Murder Unit.

Ibrahim has asked Donna to guess his age:

She sees the wind depart Ibrahim’s sails. ‘Yes, spot-on, but I look younger. I look about seventy-four. Everyone agrees.’

Are you friends, Donna asks the group:

Elizabeth nods and Ron pours. They are on a second bottle. It is twelve fifteen.

Ibrahim agrees. ‘I don’t think friends is the word. We wouldn’t choose to socialize; we have very different interests. I like Ron, I suppose, but he can be very difficult.’

As a last introduction to the community:

There are currently around three hundred residents. You can’t move here until you’re over sixty-five, and the Waitrose delivery vans clink with wine and repeat prescriptions every time they pass over the cattle grid.

“The Thursday Murder Club” is a delightful introduction to what I hope is a long series for Mr. Osman.