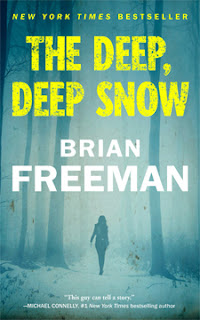 It’s satisfying to read a good book. In “The Deep, Deep Snow,” the characters are interesting, the story is compelling, the resolution is believable yet strange. Brian Freeman has created a winning trifecta.

Freeman’s characters are so human and relatable. The small towns in which most of the action takes place are pretty much small towns everywhere. Everyone is up in everyone else’s business! That is why it is so startling when a 10-year-old boy disappears and it becomes more and more obvious to the searchers that it must be one of the residents of the area who had something to do with the disappearance.

The main character is Shelby Lake. There’s a wonderful, woo-woo story about her birth. Her father, Tom Ginn, the sheriff of the town of Avery Weir (endearingly nicknamed "Everywhere"), was fishing one day when an owl landed on his boat. “Home,” the owl seemed to say. So Sheriff Ginn rushed home and found a baby in a basket on his doorstep. Tom Ginn lived alone in a converted church, and he thought perhaps someone had mistaken it for a real church. Whatever the reason, he kept the baby. He named the baby girl Shelby Lake, after the lake in which he was fishing. Twenty-plus years later, his baby girl is a deputy in his department.

The first part of the book takes place when Shelby is twenty-five, and the second part ten years later. I applaud the author for not splicing the two stories together; each story is tidily in its own part. Shelby is the narrator, and you know right from the start she is telling a story from the past. Let me savor the neatness of this book for a moment.

Each featured character is developed in a way which anchors them in Freeman’s story. Sheriff Tom Ginn has the beginning stages of dementia. Shelby is close to having to make Tom face his disease. Deputy Adam Twilley is Shelby’s partner, but he is jealous when Shelby is chosen to be the FBI’s liaison. Monica is the sheriff’s office secretary. She carries the ashes of her dead dog around with her. Several of Shelby’s high school classmates still live in the area. They were volleyball teammates who won a championship together. For instance, Breezy works at the diner where Tom and Shelby eat every day. Also, Breezy likes men, let’s just say that. Another classmate, Violet, went to law school, came back, and is on the city council. Trina was Shelby's high school volleyball coach. She subsequently became Shelby’s best friend, and her daughter, Anna, is close to Shelby.

Poor Jeremiah Sloan disappeared one day. His bike was found in the forest. Shelby and others slowly tease out some of what happened that day. Jeremiah was ten-year-old Anna’s best friend, but shortly before Jeremiah disappeared, they stopped hanging out together. What had happened to Jeremiah before he disappeared, everyone wants to know. Jeremiah’s mother wants the FBI brought in because Tom is not up to the job, she says.

Special Agent Bentley Reed heads up the FBI involvement. Surprisingly, he and Shelby get along. He listens to her opinion about local goings on and respects her observational ability.

The second half of the book deals with where everybody is ten years later. Freeman catches us up to the happiness and tragedy which has taken place in that time. Parts of the story are moving but not maudlin. It’s not neat and tidy and some people have not lived happily ever after. Then several incidents move the story forward significantly. The people who are left are reunited to unravel new information. Yes, I am being deliberately parsimonious with the information of the ten-years-later storyline.

I was impressed with how Freeman brought almost everything together. Things that didn’t seem to matter wound up mattering. I was deeply satisfied with the resolution. (The questions Freeman didn't answer are left as tantalizing bits on purpose.) I was especially taken with the relationship Shelby has with her father. In the second part of the book, Tom is to the point in his dementia where he slips in and out of time:

His mind operated like a time machine with a bug in its programming. You couldn’t tell where it would carry him next. Whenever my father went traveling he came out at a different moment of his life. Sometimes the moments were enveloped in fog, and sometimes they were crisp and clear. And you never knew how long any given moment would last.