Two Books But No Review

I read “Red Pill” by Hari Kunzru and “Tokyo Ueno Station” by Yu Miri. I have no reviews to share, not only because they are not mysteries -- I often have reviewed non-mysteries before — but also because they are of a philosophical, existentialist bent and defy neat explanations. I read mystery books, for goodness sake, because whodunnit becomes AllIsExplainedInTheEnd. It’s not that I am beneath (or above) reading a good postmodernist novel. I can go with the flow of the angst protagonists suffer over their what-is-life-why-am-I-here quandaries. It is simply this: I cannot explain in a front-to-back manner what these books are about without massive amounts of wordage. This, then, is what is left: 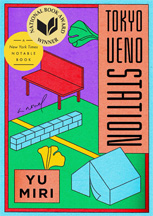 Red Pill (Knopf, 304 pages, $27.95, c2020)— Someone or something is lurking just out of sight — but not physical sight, rather inner sight — of the protagonist. It is a dread, the understanding of which cannot be explicated by the narrator until the end. Then the dread becomes manifest. (And it’s so much worse than one could imagine, in my opinion.)

Tokyo Ueno Station (Riverhead Books, 192 pages, $25, c2020) — Despite all the reviewers and the author proclaiming the protagonist is dead, that's not the way I read it. Kazu is a man who had to leave his family in a village far away in order to earn enough money to support them. He works hard but feels no joy. He does not know his family, and before he knows it, his adult son is dead. Embracing but not understanding his existential problem, he eventually becomes homeless and lives in Ueno Park. He ponders his past, his losses, his hut and day-to-day living in the park. He ponders all this, if you would believe everybody else who read this book, while he is dead. Of course, the only part that lends credence to him being dead is at the end when you may (or may not) discover how he died and the vision he “sees.”

Why don't I acknowledge the protagonist is dead? I saw the storytelling as more important than the physical state of the main character. It's a device, not a state of being.

Both books are melancholy.