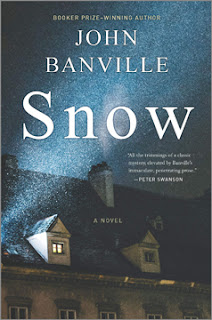 John Banville is known by another, more familiar name to the mystery world: Benjamin Black. Under this pseudonym, he created the character of a forensic pathologist named Quirke. In “Snow,” Quirke is on his honeymoon, and that brief mention is his only contribution to the story. Apparently, Banville has decided to dispense with his alter ego and just write as John Banville henceforth.

“Snow” begins in the best, albeit very bleak, Agatha Christie way and ends with a very Vladimir Nabokov touch, no double entendre intended. Beware, those who seek a cozy winter novel set in an idyllic village in Ireland in 1957, you will get a nasty twist for all your trouble. Not that I’m giving away anything; a garden gnome could see what was coming. But could a garden gnome write the way Benjamin Black/John Banville does? Not even the finest pointy-headed of the lot could.

Let’s look at the title, “Snow.” In Banville’s story, snow falls heavily, covers everything, damages some things, obfuscates that which should be plainly visible. The clues from the murder – body in the library of a proper crumbling British manor house – the victim, the perpetrator(s), the huffy housekeeper, the sulky stableboy, the petulant, haughty children, the damaged wife, the colonel in the library with the candlestick are all mystifyingly unhelpful.

St. John (“Sinjun”) Strafford (“with an ‘r’”) is the awkwardly inappropriate detective assigned to the case. He wanders around befuddled, befogged, and bemused in the snow, although he is smart. He comes from an old aristocratic background, he is Protestant, and he was maybe promoted too soon.

Och, did I mention the action takes place in Ireland, near Dublin? Strafford is outnumbered by Catholics. Now to introduce the murder victim. He was a Catholic priest, Father Tom. Because of the heavy snowfall, he was kept from returning to his home and was staying the night in the manor owned by Colonel Osborne, Protestant. Father Tom died in a rather dramatic way: his throat was slashed and he was castrated.

Osborne recognizes at once one of his own when he meets Strafford. Strafford’s equally ancient family lives a few counties over. He has disappointed said ancient family in his choice of livelihoods. Imagine, a common policeman. Strafford’s lineage opens doors for him with the family, for all the good it does him. The family members effortlessly turn away direct questions, especially the colonel’s young second wife whose multiple personalities confuse everyone.

Strafford seems very obtuse and naive about following the clues to their logical conclusion. Maybe because it’s 1957? That doesn’t seem to be a complete excuse. Nevertheless, the murder and its solution are not the point. Banville explores the psychology of the times. He is most excellent at letting his characters define themselves in little sweeps of dialogue or action.

Poor Strafford can barely consider the facts of a case because his own life is in such a muddle. What exactly does he want? What is important to him? He loves no one and no one loves him. He is attracted to the daughter of the house, the colonel’s wife, the rosy-cheeked, plump maid in his inn. He is untethered, as lost in his life as he sometimes gets in the deep snow and woods surrounding the manor.

Banville (and Strafford) does solve the mystery. He provides background in a very well-written, shocking prelude to the murder, which appears towards the end of the book. Banville is a literary force.

To give you a sense of Banville’s mix of subtlety, humor, and gristle, here are some excerpts:

“Thinking of these things, Strafford was once more struck by the strangeness of this killing How could it possibly have come about that a Catholic priest, ‘a friend of the house,’ should be lying here dead in his own blood, in Ballyglass House, hereditary seat of the Osbornes, of the ancient barony of Scarawalsh, in the County of Wexford? What, indeed, would the neighbors say.”

“They were, all three of them, bored and cold and eager to get the hell out of this big chilly gloomy bloody place and head back as fast as their black van would carry them, and the snow would permit, to their cozy quarters in Pearse Street. They were Dubliners — being in the country gave them the jitters.”

“When there was a lapse [in conversation] like this on the line, if Strafford listened hard he could hear, behind the electronic crackles, a sort of distant warbling. It always fascinated him, this eerie, cacophonous music, and gave him a shiver, too. It was as if the hosts of the dead were singing to him out of the ether.”