The One Man by Andrew Gross 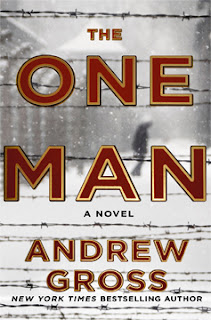 “The One Man” is a departure for Andrew Gross. Instead of a contemporary thriller, “The One Man” is set during WWII. It mostly deals with the horrors of the Auschwitz concentration camp. For a novel with such a gravely serious subject, it is a tad schmaltzy. From the patriotism heralded by a telephone conversation with FDR to the contemporary story bookending the WWII story, the “romance” of war also runs through the book.

Nathan Blum is the son of middle-class parents in Krakow, Poland, when all hell breaks loose. Hitler has hornswoggled the Germans, and the Nazis are storm-tromping all over Europe. Nathan has been chosen to carry a significant Jewish relic from Poland to safety. Once across the border into freedom, he cannot return. Later he hears his beloved family was executed by the Nazis. Nathan journeys to the U.S. and enlists in the Army. At the age of 23, he becomes a Grade C junior analyst with the OSS. Irritated with his inactivity, he plots to move himself into a more active role, when fate intervenes and the choice is made for him. His newfound country wants him to go back to Poland, more specifically to the horror of Auschwitz, to rescue an important scientist.

Professor Alfred Mendl is fictional. The science of what he supposedly knows which is crucial to the Manhattan Project is real. Without Mendl’s knowledge, the atomic bomb project may be delayed beyond the point of usefulness, and many more people will die before the war ends. Mendl and his family are captured just as they are on the verge of freedom and sent to Auschwitz. And this is Nathan’s task: to break the professor out of Auschwitz. But first, Nathan must break into Auschwitz, a little harder than one might think.

Gross populates his story with lovable characters to cheer and evil characters to jeer. In that sense, his book has a very cinematic nature. Good versus evil is good box office.

Gross knows his way around the roller coaster nature of plotting a thriller. He builds to a fiery ending that brings out all the clichéd (but nevertheless interesting) moments. I could have done without the sentimental ending, but it fits with the tenor of the rest of the book. “The One Man” gets a thumbs up for being a page-turner, for the detailed depiction of the abomination of Auschwitz, and for having a couple of memorable characters: the professor and his protégé Leo.