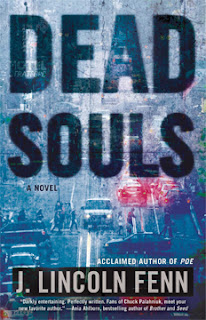 “Dead Souls” is a captivating, well-written novel of horror. “The” Devil, minus horns and red suit, insinuates himself into our modern world and reels in needy souls. J. Lincoln Fenn’s premise is simple, but her handling of it is complex and stylish.

Fiona Dunn, a master of public relations, is a force to be contended with at work. In her personal life, she is closed off, insecure, and given to expecting the worse. As a child of drug-addled parents, she had to grow up quickly and learn to trust no one. That being said, she has let Justin into her life. Justin is normal. She marvels at the fact that she is in a serious relationship with a man who has no family issues. One could say that this is the ultimate novel of a woman who feels she doesn’t deserve happiness doing everything she can to undermine it.

The Devil finds Fiona getting drunk in a bar after suspecting her boyfriend of stepping out on her. Other than trying to persuade her of the virtues of Guinness beer, The Devil (or “Scratch,” as he prefers) seems content to ply her with mojito royales until the night becomes a blur and she wakes up naked in her apartment the next morning. She vaguely remembers telling The Devil something about how she thought of herself as an invisible girl. She vaguely remembers Scratch asking her for her soul. Ha ha ha. But, seriously, where are her clothes?

Long story short: Fiona can turn invisible at will. This is loads of help with her job, snooping out secrets to benefit the selling of chichi backpacks. The drawback: The Devil requires “a favor” in exchange for the power. No refunds, no give-backs, no saying “no.”

A small group of “dead souls" (other of Scratch's victims) bands together once in a while in an old converted church to share drinks and stories. Dead souls easily recognize each other by the smoky miasma that covers them, visible only to each other. Of course, the horror show begins when The Devil claims his due among the group. Fiona, ever the wheeler-dealer, is convinced she can find a way out of her contract.

There isn’t much humor in the story, and what there is is dark. I thought a nice touch was having one of the characters reading John Grisham’s “The Firm,” another book about what a character is willing to sell in order to be a success.

I cannot say enough about J. Lincoln Fenn’s writing. It is dark, modern, swift, quirky, twisted, creepy, grisly, heartless and heartfelt, romantic and deadly. Oy vey, Fiona is in deep, deep trouble, but she has a good writer to tell her tale.