Marked for Life by Emelie Schepp 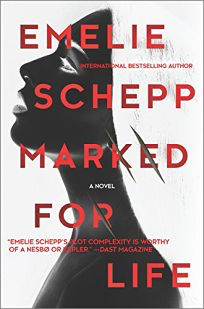 The writing is plain and often clipped, but the characters and storyline of “Marked for Life,” a Swedish import by Emelie Schepp, are intriguing. If you like strong but eccentric women characters, then Jana Berzelius is for you.

Jana is a prosecutor in a big city in Sweden. Her father was Chief Public Prosecutor before he retired. She is driven to please him, but she has tiny, little quirks that mark her as a horse of a different color. Unlike U.S. prosecutors, Jana appears at crime scenes, interviews, autopsies, CID meetings, and the like. She doesn’t get to just sit at a desk and sharpen her writing skills.

As such, she catches the case of the murder of Hans Juhlén, the man “in charge of asylum issues at the Migration Board.” He seems like such a milquetoast of a guy, but no one can be that clean, can they? It is up to Jana, DCI Henrik Levin, and DI Mia Bolander to discover his secrets, if there are any. Mia is both irritable and irritating. She has taken a dislike to Jana, and while Jana doesn’t show it as obviously as Mia, the feeling is requited. They are both strong women with very different approaches to their personal and professional lives. Jana is organized, dispassionate, and smart. Mia is smart, too, but she is disorganized, hot-tempered, broke most of the time, and doesn’t let scruples get in her way. They are on the same team with the same goal: find who killed Hans Juhlén. Let the contest begin.

The story of the murder alternates with the story of a young girl, an immigrant being smuggled into Sweden, who is caught, imprisoned, tortured, and driven to commit evil acts. But by whom?

It is clear that something in Jana’s past caused her significant trauma, but she does not remember it. The only souvenir she bears is a striking scar on her neck. Somehow (because otherwise it would be a very disjointed book) her life is related to some of the people the investigating team runs across. It will not come as a surprise that the crime will answer some of Jana’s long-standing questions.

This was a page-turner of a book. Jana is a tough cookie with an interesting attitude. Mia is pathetic but a good counterpoint to Jana. No one is without flaws in this book. It’s probably a cliché that main characters must have defects. Hercule Poirot had an eccentricity but not a defect. Ditto, Sherlock. (In the canon, cocaine was not a true defect.) Ditto, Nero Wolfe. Gone are their ilk. But this is the organic nature of writing.

WARNING: This does contain graphic scenes of violence to children.
Posted by Barbara Tom at 2:56 PM