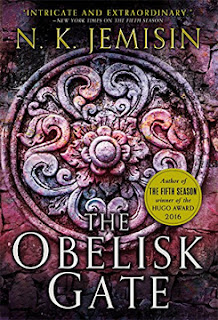 “The Obelisk Gate” is the second in the Broken Earth sci-fi trilogy by award-winning writer N. K. Jemisin. It would be futile to read this book without having read "The Fifth Season," the first in the series, because the plot is complex and winding, and Jemisin just starts right in where she left off in the first book. Even having read the first and second books fairly close together, it was hard to remember some of the characters. Perhaps you should wait until the third book comes out and read all three in quick succession.

I am amazed at the intricacy of the world that Jemisin has created. It has some science and some scientific magic behind it. It is an Earth gone wacky tens of thousands of years in the future, so far in the future that they have forgotten about us lowly humans in the 21st century. Father Earth, as the inhabitants call the world, has gone to war against the cruel invaders: the human descendants and post-humans. Presumably the world is rebelling against indignities suffered upon it by humans by sending devastating earthquakes, volcanoes, and deadly ash seasons that blot out the sun. Oh, and the moon has disappeared from the sky.

Mysterious giant jeweled minerals float high in the air. Roggas, deviant humans with psychokinetic abilities,  are sometimes hunted for being different and dangerous, and sometimes trained in the hope of controlling the deadly natural calamities that occur. Guardians are created to both help and destroy the roggas. In the first book, a giant rift in the earth caused apocalyptic earthquakes and seismic activity. Ash will soon blot out the sky for thousands of years, probably destroying all life on earth. Those people who survived The Rift are scrambling to figure out how to survive.

Into this foreboding mix Jemisin tosses a mother and daughter set of orogenes (the polite name for roggas). They have been estranged and separated from each other, each landing in a community that seeks to shield and/or control them. Essun, the mother, is one of the most powerful orogenes ever. She lives in an underground crystal cave system. Ten-year-old Nassun may surpass her mother in unconventional ways. She has stumbled into a community with Guardians who tell her they will help develop her powers. Essun's and Nassun's journeys are primarily what comprise the second volume.

Second volumes of trilogies are tricky. They must begin by resolving a cliffhanger from the first book and then must set up a cliffhanger for the last book. By necessity they rarely resolve the major issues and characters. Jemisin plays this tricky work very well. She encourages hope, while sowing despair. She resolves some issues, while blowing the story up with others.

What is most provocative about Jemisin’s world are the groups of people who have been developed out of necessity and birth, how segregated some of the society has become, how elitist and unforgiving, how bigoted and afraid.

The stage is set for either Essun or Nassun, or both, to use whatever abilities they can muster to turn back the everlasting darkness of ash and restore the world to a more accommodating place for humans, or the next generation of humans, whatever that might be.

This series is a great diversion and a presumptive cautionary tale for us in the 21st century, as we gobble up our natural resources and destroy our environment.