The Glorious Heresies by Lisa McInerney 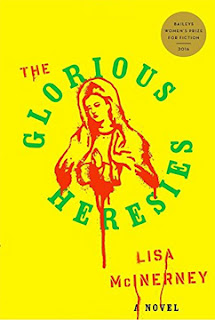 In “The Glorious Heresies,” a story full of accidentally interrelated characters, the one you should pay particular attention to is Maureen. She joins the story in a dramatic fashion when Jimmy Phelan, her adult son, is tasked with disposing of the body of the man she has just killed. (By hitting him on the head with a holy stone, no less!) Jimmy has only recently been reunited with the mother who was unceremoniously excised from his life just after his birth. And so goes life in Cork, in an Ireland still recovering from the banking and concomitant housing disasters of only a few years ago.

Author Lisa McInerney’s story spans six years, especially noted in the character of Ryan Cusack who begins the book as an almost fifteen-year-old and ends as an almost twenty-one-year-old. Although Maureen is the dancing light in the dark tunnel, Ryan is the one who must take the Herculean journey through the tunnel. Ryan strives to do the right thing by his abusive father, Tony, and his girlfriend, Karine, and instead keeps losing his way. Robbie’s descent begins after another one of his father’s beatings. No one takes the young boy aside to help him, no one except a predatory neighbor, Tara Duane, who has no filter, sense, or scruples. A young guy has no chance.

McInerney’s book is about the underclass of Cork society. They are alcoholics, drug dealers, prostitutes, fixers, and people out to find some comfort in a cold world that has mostly abandoned them.

Getting back to the original scenario I described, the question might be asked: Why didn’t Jimmy or Maureen call the police (gardaí)? Jimmy is a criminal boss and calling the police would never be at the top of the list for him. Maureen seems to live in an alternate reality and wouldn’t they think she had murdered the man on purpose? So Jimmy calls an old friend, Tony Cusack (Ryan’s alcoholic, abusive father), and intimidates him into helping get rid of the body.

The story tangles as each character’s weakness leads to unexpected consequences … and coincidences in best Shakespearean fashion.

The final question left at the end is what would have happened if a few of the main characters had never been born? What if some of the subsequent pregnancies had never occurred? How mundane and untroubled the story would then have been. The various lives would have been unnoticed, unwritten, unsung. Were the miseries attached to each life worth any joy they might also have had?

McInerney is a lyrical writer. Her writing is also joyous and darkly comic, despite the often bleak and tragic subject matter. She joins my other favorite Irish (mixing Ireland and Northern Ireland here) crime writers (Tana French, John Brady, Brian McGilloway, Stuart Neville, Benjamin Black) in being able to write the heck out of a sentence.

About Jimmy: “… [I]t was better to run alongside Jimmy Phelan than have him run over you.”

About Tony: “The charming laziness that had once defined Tony Cusack had morphed into dusty apathy…”

About Tara: “Coincidences followed Duane like rats after the piper.”