Under the Harrow by Flynn Berry 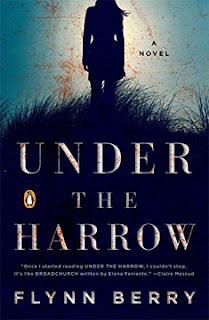 "Gone Girl" and "The Girl on the Train" were successful books, thus paving the way for more books with an unreliable narrator at their core. "Under the Harrow" joins them with unreliability to spare.

It's not apparent whether Flynn Berry is a British or American author, but since she is a graduate of Brown, I'm popping for the latter. Berry's story is set in England, mostly in the the town of Marlow, "on the edge of Oxford." Berry, unlike some American authors who write "British" books, doesn't ladle on the cozy and/or charming British-isms. There are no vine-covered cottages, no fairy cakes, no rectors with dead bodies, no canny villagers whose accents make them unintelligible. Berry gives us a woman, a dead sister, a past tragedy, a current tragedy, and many suspects.

Nora Lawrence is the woman. She has been coasting along in life and is currently a landscaping apprentice. She is close enough to Rachel, a nurse in the Oxford area, to visit her frequently from her place in London. Rachel is, of course, the dead sister. It is Nora's ill fortune to arrive for a visit with Rachel, only to find her sister and her sister's dog slaughtered.

Nora has an idea about who might have murdered her sister. When Rachel was seventeen, she was brutally attacked by a man. By a man who was never caught. For years the sisters checked news items to see if any other girl had suffered the same fate, but there was no answer waiting for them. And that would be the past tragedy. Find that man or boy and the police might find Rachel's killer.

Soon Nora remembers: "Rachel said there was something wrong with the town." Slowly Rachel pieces together information that Rachel was taking steps to leave Marlow and move to the Cornwall region. There's so much about Rachel that Nora didn't know. Nothing is apparent any more. And that is what makes Berry's book so intriguing. In the process of learning about Rachel's secrets, we learn about Nora's as well.

In her first-person narrative, Nora seems distraught enough at times that the only evidence of her thought process and subsequent actions is when physical evidence appears to tell the story rather than her narrative. We see evidence of her temper and almost psychotic insistence on considering one man after another as suspicious. Berry presents enough that soon Nora herself may be tainted.

Berry does a great job moving the slider from sane to questionably bonkers. It's enough to keep the story and the pulse racing along.