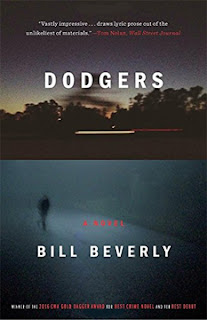 I’m not sure what Bill Beverly’s background is other than the information contained in the blurb on the back cover: He grew up in Michigan, attended Oberlin and the University of Florida, has a Ph.D., and teaches at Trinity University in Washington, D.C. The story lies in what is NOT said. In a nutshell, “Dodgers” is about four young black boys traveling across the country to kill a judge who is scheduled to testify against their gang boss in Los Angeles. What research, life experience, or attentive ear qualified Beverly to write this book? I have no personal experience or knowledge of gangs in L.A. (other than being a loyal fan of “The Wire,” set in Baltimore) and wouldn’t know if Beverly’s portrayal of gang activity is accurate. For instance, if there is a lot of street cant that gang members use in normal conversation, it’s mostly absent from the dialogue in this book, to the benefit of the reader — I had to have the captioning turned on while I watched “The Wire” — but it still sounds authentic.

Perhaps authenticity is not the main goal anyway. It’s a bizarre coming-of-age kind of story, a what-can-go-wrong-will-go-wrong kind of story, a touching story of a boy without a sense of normal who must learn to inhabit the alien environment of the Midwest.

But it begins this way.

“East” is fifteen years old. He stands guard on a drug house in “The Boxes” housing section of L.A. — a designation I Googled and could not find in the real world — and is in charge of a number of other boys who are also guards. It’s the kind of world in which a young child, let alone a teenager, cannot show fear. East’s home situation is frangible with a zoned-out mother and a sociopathic younger half-brother. He would rather sleep in a box in an abandoned basement than spend time at home. (Yes, boxes big and small inhabit the book.)

A judge scheduled to testify against East’s gang boss is hiding out in Wisconsin. East is chosen by the gang boss (also purported to be his uncle) to be part of a crew comprised of his younger half-brother, Ty; a former college student, Michael Wilson; and the smartest person on the trip by far, Walter. In order to not leave a paper trail, they must journey to Wisconsin in an old van, obtain guns, and kill the judge. Michael Wilson, always referred to as such, is by far the oldest at twenty but not necessarily the best planner.

None of the boys has killed anyone, except, maybe, for Ty. At thirteen, he has the stone-cold stare, the attitude, and a touch of craziness to make anything possible. There is no doubt who the triggerman will be, but all must be willing to participate.

East is a sensitive teenager. He tries to take care of his mother, such as she is. He tries not to let kindness trip him up. He is still capable of being horrified at some of the things he sees. He sounds like absolutely the wrong kind of person to send on a hit run, but he is the right kind of fictional hero to acquire an odyssey.

The poetry and power of Beverly’s book lies in the observations East makes of the country he travels through and the people he meets. What is the toll on East's psyche caused by his and others’ actions? He suffers traumatic blow-back from what he witnesses and what he himself has done. "Dodgers" is a heart-wrenching book about survival and belonging.

"Dodgers" has been nominated for an Edgar Award for Best First Novel.