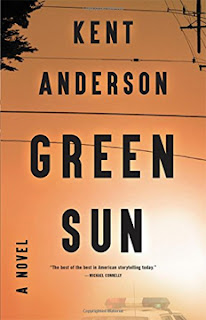 “Green Sun”'s combination of metaphor, poetry, grittiness, and exposition of human foible and grace are hard to beat. (Plus, I don't often come across a crime novel that pays homage to the “rosy-fingered dawn” of “The Iliad.”) I nominate this for next year's Edgar Award for Best Novel.

“Green Sun” follows 1987's “Sympathy for the Devil” and 1996's “Night Dogs.” The latter is set in Portland in 1975, in the gritty, bad-side of a mostly mellow city. But back then in real life there was a lot going on. A lot of it bad. Kent Anderson was a police officer in both Portland and Oakland, California. “Night Dogs” was Portland, and “Green Sun” is Oakland. Both are thoughtful and eye-widening police fiction with perhaps more than a soupçon of truth.

Hanson — just Hanson — starred in “Sympathy for the Devil” and “Night Dogs,” and the trail picks up for him in Oakland after a period in which he was an English professor in Idaho. Yes, police officer to professor and back to police officer. Hanson’s latest goal is to bury his violent and traumatizing past as a soldier in Vietnam and police officer in the North Precinct of Portland and score a gig in a quiet backwater of California after qualifying for his law enforcement certification by serving in Oakland for a year. Throughout the book, Anderson tosses in reminders of how much time Hanson has left on his Oakland PD service before he qualifies for transfer. His four years on the Portland PD have counted for exactly nothing.

Underlying the episodic storytelling nature of “Green Sun” is the story of the community of Oakland: whites fleeing the expansion of black neighborhoods and the drug trade. If “Green Sun” were the only book one read set in Oakland, one’s takeaway would be that it is a war zone. Because Hanson marches to his own drummer, he is denigrated, ignored, and given the worst calls. If Hanson were paranoid, he might think someone wanted him dead, or at best wouldn’t care if he were dead.

Hanson has the dreaded night shift. Most of his colleagues ignore the “inconvenient” calls to which Hanson is drawn like a magnet. For instance. Two elderly gentlemen have called the police because they think their car has been stolen. The first answering officer blew them off, thinking they had merely forgotten where they parked. Hanson stops, politely listens to their tale, offers to drive them home, spots their car on the way out of the neighborhood, and respectfully helps them on their way. In many ways, this book reads like a fairy tale. The hero rises above the meanness of his fellow humans, his good nature and humor shining through.

However, this hero, Hanson, has a mean streak he struggles to suppress, a drinking problem, nightmares, and insomnia. He sublimates fear, perhaps in the hope that he will die and not have to worry about what he should do next in life. He may feel unworthy of love himself, but his actions express his optimism and hope for his fellow citizens. His first reaction may be to kill, but his first outward action usually is kindness. He is Mr. Complexity.

Hanson’s world is perhaps Oakland of 1984 or so. (I think Anderson dropped lots of hints, but I was too ignorant to grasp them.) In this world black/white tensions are tightly humming and police corruption is a given. Hanson meets many characters in the shadowy night world he patrols. He has no partner because of budget constraints, so his human conversations are pretty much solely with the denizens of the tough, poor sections of black Oakland. He tries to see past their crimes, complaints, and complicity, and instead sees the individual struggles and honors that. Plus, he really doesn’t like to do paperwork. (Although his one accolade from his hostile superiors is that he writes a good report.) He is the master of disarming ignitable situations by himself. He quiets drunk bar customers and a crowd of screaming people with equal finesse.

Throughout a large part of the book, a large black rabbit, first met in the grounds of a Buddhist temple, sporadically hops through scenes, sometimes as inspiration, sometimes as savior. It’s all part of Anderson’s quirky world view, and it’s a balance against the venality he also describes.

But he wasn’t brave, or even crazy, he just wasn’t afraid, only angry sometimes. He was supposed to have died over there in the war. He worried sometimes that he might fuck up, get somebody else killed, do something careless and look stupid when he died. He didn’t want that, and, of course, he hoped it wouldn’t hurt too much or take too long when it happened. It was that simple, and he kept it a secret.

Look for Anderson's scene in which the green sun of the title appears. It's a captivating piece of writing.

Periodically, Anderson tells us Hanson is sleeping. Then a scene follows that might be his dream/nightmare, or it might be what is continuing on in his world without him. Whichever, it has the feel of a dreamlike grim fairy tale. Anderson’s art is combining realism and dream into a book that is entertaining and fine. The short takes on Hanson’s call-outs are illuminative and humbling.