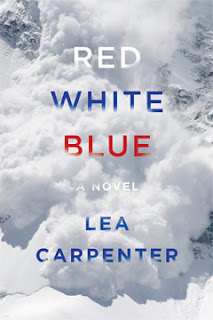 Two stories are braided together in this poetic and beguiling spy/father-daughter novel by Lea Carpenter.

Much to her surprise, a young American woman, Anna, discovers her father, Noel, was a spy, mostly working in Asia. From that revelation flows a re-examination about their relationship: It wasn’t her, it was him. Her mother, Lulu, moved on to another life, abandoning her daughter and husband early on. Again, maybe it wasn’t her, maybe it was him. Still, revelations only beget more questions, and in the midst of that turmoil, Anna discovers she has married one kind of man and has gotten another.

Anna is set to marry Jake (whose name doesn’t appear for quite some time, although he is important in moving events forward) in Switzerland, when Noel’s body is found buried by an avalanche just before the wedding. Noel had been visited by strangers just shortly before he headed up for a ski. Is there a connection? Anna doesn’t think about this for quite some time.

On Anna’s long-delayed honeymoon, a man begins a conversation with her in a bar. He takes her to a beach where he invites her to swim far beyond the buoyed boundary. He reveals in a shadowy way his connection to Noel, who was his mentor at the shadowy CIA.

Anna learns about a young Chinese woman who spies for her father and the unnamed colleague. Veritas is her code name. Who was she and what was she to both men? Is she why her father died in circumstances, come to think of it, that seem more sinister by the minute? Why has the colleague contacted her? He does not romance her but he acts with familiarity towards her. She responds with trust, although he has done nothing to warrant it.

“Red, White, Blue” moves between the first-person narration by the unnamed colleague and Anna’s story told in the third-person. Noel’s career and obsession unfolds before us and before Anna. His still waters ran deep and with compassion.

There’s a lot of talk about polygraphs and Wonder Woman’s golden lasso, both items that purportedly determine if someone is lying. Being fiction, the lasso is infallible, but the polygraph machine apparently is subject to interpretation and fiddling. The question that runs through the book is what is truth, what is truth-telling, and what is holding to the truth. In truth, veritas.

As Anna’s story progresses, we see her husband, a golden boy with a golden touch, go from being an impressario in the pop music world to being a contender for U.S. Senator from New York. Anna’s own accomplishments begin to wane in the harsh beauty of his light, until she is no longer truly herself. The colleague’s intrigue draws her back into her own light long enough to assess what she wants to do to honor herself and her father.

Although the spy bits had substance, they weren’t overly meaty, and that’s good. Anna’s story showed her fading out. She was Phi Beta Kappa, worked for the prestigious Ford Foundation, and had a mission and an independent life before marrying Jake. What is she now if she is not Mrs. Jake? The novel is about Anna, and that’s good, too.

Here is an example of the writing that captivated me:

“For years, whenever she thought about Switzerland, she thought less about prayers and more about that breakfast, what they’d discussed, this idea that people tell you who they are. As of people, so of things: A thing can elicit emotion, too, can tell you what it is, and you should believe it when it tells you. Sometimes a thing looks like a riddle when it’s a clue. That thing that arrived in Anna’s mail after her father died, after the burial and the honeymoon, looked like a riddle but was actually a clue. It was trying to tell her something. You might say it was shouting.”


For the odd mix of spycraft and inner reflection, for an underlying story that touches the heart, for saving Anna, here is an MBTB star for Lea Carpenter!
Posted by Barbara Tom at 10:24 AM