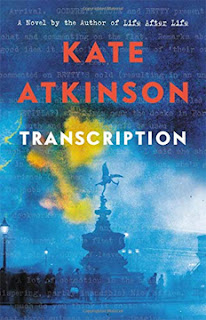 Oof! Kate Atkinson does it again. There’s a metaphorical punch to the solar plexus at the end. And before and including the final punctuation, she leads us on a marvelous journey. Atkinson’s dry humor, sly characterizations, quirky storyline, and acerbic asides are worth every penny of what I hope you are paying for her book, if you are able. (Authors need more than kind regard to live on.)

Juliet Armstrong, an earnest innocent, enters government work as an eighteen-year-old after her mother dies and she is left rudderless. The UK has not yet entered World War II, but it is only a matter of time she knows. She is catapulted — maybe that is too strong a word, since the work is tedious — into being a transcriber of recordings of an MI5 operation. In the apartment next to her small apartment/office, an MI5 operative is pretending to be a spy for the Gestapo. He meets with Nazi sympathizers. They tell “Godfrey Toby” all they have discovered about potential British maneuvering, and he passes the information along to … well, British intelligence.

Then one of Juliet’s superiors asks her to pose as a sympathizer and infiltrate a group led by Mrs. Scaife, the nasty wife of a naval admiral. She is dogmatically related to all the ordinary but intolerant people who meet with Toby, but Mrs. Scaife’s social status is a step up. She is the link to all the other upper crust British fascists and to their misguided plots.

Much later, as an aside, Atkinson follows up on one of the lesser lights in the conspiracy, Trude. She is dying, alone, in a hospital. A nurse importunes Juliet to sit with Trude, mistaking her for a friend.

It would have taken the hardest heart — harder even than Juliet’s — not to feel a little sorry for Trude, but then Juliet thought of Fräulein Rosenfeld, who had lost all her prettier sisters to the camps. She stood up and said, ‘Well, this is goodbye, Trude,’ and left her to die on her own.

Atkinson moves among stories set in 1940, 1950, and 1981. Even within their individual time frames, Atkinson bounces the story back and forth some. Juliet travels a long way in both time and experience from when she first joins the Service to the point when she watches a dying Trude. In between are many spy moments, even some moments of suspense and violence. Here is Atkinson describing the body of a murder victim:

Beatrice looked as though she had been modeled from clay, rather badly, and the clay had begun to deliquesce slightly. Someone had washed her, but the coal dust was ingrained in her skin, and her mousy hair was sooty. Something had already started nibbling at her and Juliet wondered what kind of creatures lived in coal holes waiting for this dreadful food.

But the majority of Atkinson’s book is quiet. We follow Juliet, her obsessions and confusions. She is so idealistic that the only thing that can happen, novelistically speaking, is disillusionment. Even that happens quietly. Atkinson describes her creation:

That eager-to-please, academic sixth-former, who played on the left wing in hockey, who was the leading light of the drama club and practiced piano almost every day at school (because there was no room for a piano at home), that girl who was a keen Girl Guide and who loved drama and music and art, that girl, transmuted by bereavement, had gone. And, as far as Juliet could tell, she had never really come back.

In 1950, circumstances take a turn to the sinister. She is sure she is being followed. Someone has sent her a threatening note. Whom can she trust? She is working for the BBC as a children’s program producer. There is nothing more benign. Then why does she feel she is still at war? She ruminates on the agents of her destiny:

Her war (and her peace too, she supposed) had been shaped by the men she knew. Oliver Alleyne, Peregrine Gibbons, Godfrey Toby, Rupert Hartley, Miles Merton. She thought they sounded like characters in a novel by Henry James. One of the later, more opaque ones, perhaps. Who, she wondered, was the most opaque of them all?

As an example of Atkinson’s quirky humor she bestows upon Juliet a quiet abhorance of hideous metaphors:

‘You have an eye,’ Miss Gillies told her. I have two, she thought.

She cast her eye around the room (dreadful phrase) …

The book begins in 1981. Juliet has just been hit by a car. She sees the tunnel heading into the light. The rest of the book is the flashback of her life, a transcription, if you will, of her life. Imagine what could have been, instead of what was. Does she have regrets? Yes, she (and Frank Sinatra) has a few, including a major one that isn’t revealed until the end of the book. But then, in the shadowy world of espionage, everyone probably has a few.

Kate Atkinson is a master of the hidden story. Her characters quietly hide in plain sight. Her story is defined as much by what she doesn’t say as what she does say.