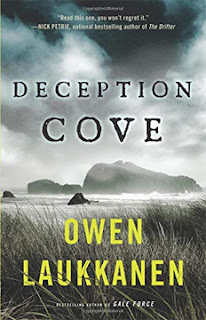 Owen Laukkanen has created an interesting couple of protagonists: a female ex-Marine with PTSD and a male convicted murderer just released after seventeen years in prison. The action takes place in the Pacific Northwest, a suitably wet and atmospheric site for what becomes an action-plus adventure.

Jess Winslow is a new widow. Her husband was no great shakes, but the combination of loneliness and the PTSD she has because of her tours in Afghanistan has driven her into a deep place. If it weren’t for her comfort dog, Lucy, she probaby would have given into darker urges.

Mason Burke was seventeen years old when he was put in prison. Now that he is about 34, he realizes he has the social ability of a 17-year-old tempered by the don’t-see-anything, don’t-hear-anything discipline needed to stay alive in prison. It’s hard for him to look anyone in the eye. It's hard for him to make conversation. His sister and her husband have taken him in, and Mason just wants to compress himself into a little, inconsequential package in their basement.

While in prison, the one bright light in Mason’s life was when, towards the end of his sentence, he was permitted to join the dog training program in prison. He and fellow inmates trained service dogs for returning vets. Lucy was the runt of the litter, rescued from what was probably horrible conditions. She trembled and cowered when she was first introduced to Mason. But under Mason’s guidance, she became a Very Good Dog. Mason’s Lucy then became Jess’ Lucy.

Upon release, Mason inadvertently learned that Lucy was in trouble. Lucy had been taken from her owner and placed in a facility to be destroyed after an attack on a sheriff’s deputy. Mason knows — knows! — that Lucy would not have hurt anyone without reason. Crossing from Michigan to the coast of Washington state, Mason is determined to find out what happened.

After much difficulty Mason finds Jess. Jess says Lucy attacked the deputy, the evil Kirby Harwood, when he threatened Jess. Apparently Jess’ less-than-honest deceased husband had something that Kirby wanted, something, she suspects, illegal.

I’ve read a couple of other Laukkanen books. He is capable of creating action without making characterization suffer. He takes great pains to do that in “Deception Cove.” He tries not to turn Jess and Mason into stereotypes and, in fact, has a cute scene in which Mason, who has no idea where he is going, takes the lead in front of Jess, who does. That is not to say that Mason pictures himself as the macho man; what that scene highlights is that Mason has no clue what he should (and should not) be doing. Laukkanen shows how capable he is in creating an interesting man-woman relationship.

This is a good read for a rainy Saturday in the Pacific Northwest when the line to see “The Avengers: Endgame” is still too long to tolerate.