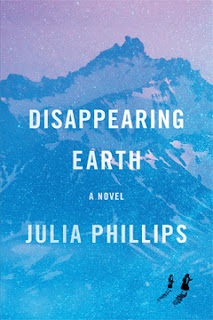 It’s good to hunker down to a book with a sense of anticipation based on practiced expectation. That is, two children have been kidnapped and the rest of the book should be about dogged police or private investigators or a determined relative tracking the children down. If the reader is lucky, the book will be well-paced, full of fleshed-out characters, even ones falling prey to a trope or two, and with writing that clamps your heart in a vise.

Julia Phillips burns your expectations and drowns your tropes in an inky bog.

Alyona, eleven years old, and her sister, Sophia, eight, take care of themselves most summer days while their mother, Marina, works. As the book begins, they are at the beach. As their chapter ends, they are being stolen away by a man who has tricked them into getting into his car.

The first expectation Phillips tosses out is where her action is set, where the kidnapping takes place and where the various characters (presented in the best “War and Peace” style in a character list) live. It’s not New York, Paris, London, or some other romantic megapolis. It’s Kamchatka, Russia. Mostly the characters wander around Petropavlovsk, but the stark and drear northern reaches are also visited. Families who travel with the reindeer herds and people with links to non-White indigenous groups are among the faces we see in “Disappearing Earth.” Phillips has introduced a genius-level blend of characters.

Here’s another expectation blown away by a hot summer dust storm: Right after the first chapter in which the girls are kidnapped, Phillips writes chapter after chapter about other people. Occasionally, the girls are mentioned in passing. Older girls aren’t allowed out because they might be kidnapped. Someone else sees a poster for the missing girls. A bear attacks a car. Someone else discovers a sore on her chest. A girl from a northern village joins a folk dancing group. In other words, life goes on.

These seemingly unrelated stories are compelling for their own reasons, so compelling that it is easy to forget that the girls, or their bodies, are still out there somewhere. What does anything have to do with anything? Phillips’ genius (there’s that word again) is displayed when she gradually draws the characters together. She exposes the links, the hearts that are joined, the black holes in the universe. In the end, the story of the two girls receives an ending but it’s almost inconsequential. It is the lives of the people whose stories we have learned on the way to that resolution that are important.


Here is an emphatic MBTB star!
Posted by Barbara Tom at 9:04 AM