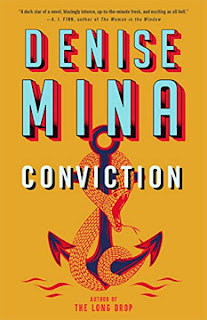 Denise Mina’s writing voice is jazzy, lippy, arresting, and Scottish. In her latest book, she presents a complicated, enigmatic, troubled protagonist, a character she writes so well.

Anna McDonald is the young mother of two wonderful daughters and the companion of a respectable lawyer, Hamish. She does the laundry, picks up dry cleaning, drops kids at school, and executes other mundane household tasks. On the face of it, she is a normal housewifey-type character.

The first eccentric thing about Anna is she likes to awaken early and listen to podcasts. Before her husband wakes and their mutual stresses and demands begin to take their daily form, she sits with a cup of tea and listens to whatever happens her way. She is just about to begin a podcast by Trina Keany, a producer on the MisoNetwork. Trina’s podcast is entitled, “Death and the Dana.” But before Anna can get fully into it, Hamish announces he is leaving her. He is taking the children and he is going to Portugal for a vacation with Estelle. Estelle? Anna’s best friend Estelle? What?

Amid the flurry of the tossed contents of Hamish’s suitcase, Anna is left to grieve. At first she is only capable of lying on her hall floor. Eventually, a knock on the door intrudes on her catatonia. It’s Fin. Estelle’s husband Fin. He obnoxiously batters on the door and harasses her through the mail slot until she opens up.

It is hard for her to focus on Fin and his problems. While still stunned by events and before Fin arrived, Anna continued to listen to “Death and the Dana,” her podcast. She hears a name she has not heard in almost a decade: Leon Parker. According to the podcast, Leon and his two adult children drowned aboard Leon’s yacht not too long ago. He had just married Gretchen Teigler, a very, very wealthy and powerful woman. Gretchen was not there when the ship went down, and she says she has no idea why Leon would destroy his own boat and kill his own children. Trina, the podcaster, has many things to explore about the mysterious sinking in the next episodes of her show. But suddenly, Anna must carry on her own investigation into the sinking. She is convinced that Leon would never have killed himself, let alone other people, let alone his children.

Here are two more bits of information about Anna: She does not drive and she will not fly in an airplane. That’s because she is not Anna McDonald, and both driving and traveling abroad might expose her deceit. Mina reveals very early on that Anna is really “Sophie Bukaran.” In spits and spots throughout the book, Mina tells the story of what happened to Sophie/Anna and why Anna declares that Gretchen Teigler is trying to kill her.

Back to the story. So Anna tears out of her house with the keys to Hamish’s prized car. What? Anna can drive? Fin tags along. Anna can’t be bothered with a road trip companion, so she periodically tries to get rid of him. But he sticks like glue. He is a bonehead about the podcast, a bonehead about being dumped, a bonehead about what really is going on with Anna. And it turns out he’s a sticky, anorexic, persistent, famous bonehead. Fin was once a rock star. Then he was famous for the disaster that enwrapped his band and his life. One of the reasons he doesn’t want to be left behind is he’s broke. Anna, on the other hand, before lighting out, scooped up the pound notes Hamish had given Anna to resettle in a little apartment somewhere.

It’s a daunting road trip because someone is trying to kill Anna again, all because her nosy neighbor, Pretcha, has snapped and tweeted a photo of Fin and Anna leaving her house. Fin, if you will remember, is famous. The tweet builds viewership momentum until Anna’s life is an open book. That’s when people begin to express themselves in violent ways in her presence.

Besides the appeal generated by the quirky stories of why Anna is in disguise, why she is trying to find out about the sinking of the Dana and Leon’s death, and what she is going to do about losing her family, there is Mina’s ear-catching writing. For instance:

I lay in bed savouring the anticipation [of listening to podcast], watching light from the street ripple across the ceiling, listening as the heating kicked on and the grand old dame of a house groaned and cracked her bones.

and about meeting Leon:

Our stories weren’t disguised curriculum vitae. We didn’t tell them as a way of boasting or declaring our relative place in the social order. There was none of that crap. These were stories to entertain, told for the shape of them, for the sake of them, for the love of a tale.

It’s hard to be among vanilla bastards all the time. Normal people can get genuinely upset about a bad haircut, cross words, sick cats. It’s hard not to roll your eyes and say the wrong thing. I often said the wrong thing — wake up, shut up, grow up. These are the wrong things to say when people are sad about some minor cruelty or sentimental incident. But Adam Ross [who worked with Anna and is an addict] was as damaged as me. He didn’t need to be shielded or protected and he knew what not to pick at. A fellow traveller. You could say anything to him. That is rare and very precious.

Plus, there is a ghostly element. When Mina first introduced it, I got "ghost bumps" and turned on all the lights.

As for the title, Amila Fabricase, the yacht's chef, was accused of murder in the yacht deaths and convicted. It is as much for this stranger as for herself that Anna stubbornly traces the fate of the Dana. The dual meaning of "conviction" is a smile from Mina's pen. Also, I laughed when I read the last paragraph. I can't remember the last time I laughed at the end of a mystery book! That, too, comes from Mina's smiling pen.