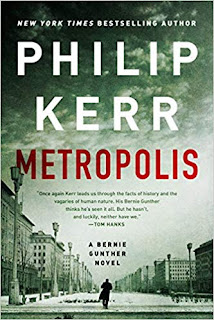 British author Philip Kerr died last year, so “Metropolis” is the last Bernie Gunther book to be released. Maybe. There is an unfortunate tendency to resurrect characters by giving them to other authors to handle. Sometimes the results are terrific, but often, meh. Bernie will be a hard character for an author to adopt. Kerr has taken him through the horrors of World War II as a police detective in Berlin to the post-war world and all its disillusionment and falsity. It’s not just the unusual time and place, it’s not that Bernie is a German in Germany during WWII, it’s not that Bernie is a cynical optimist, it’s that Kerr has breathed startling life into Bernie and his time. It was heartbreaking to learn of Kerr’s death, because it also meant that Bernie, as Kerr wrote him, is also dead.

In “Metropolis,”* Bernie is a beat cop who gets a big break when he’s asked to join the murder squad. The year is 1928. Let Kerr provide the context for Berlin between wars. Morally and politically lost after WWI and with Hitler on the rise, this is Berlin through Bernie’s eyes:

...Berlin now had almost nothing in common with the rest of the country. Increasingly the capital city was like a large ship that had slipped its mooring and was slowly drifting father and father away from the coast of Germany; it seemed unlikely we were going to return its more conservative ways, even if we’d wanted to. It’s not just people who outgrow their parents and origins; it’s metropolises, too.

It’s never the cold that brings out the worst in people, it’s the heat. If you can call them people: the sick, venal, lowlife that lies oozing at the bottom of the strata we are wont to call Berlin society. Sometimes I had the strong idea that [artist] George Grosz was right and I was wrong; that he was only recording what was already there: the indifferent fat bankers, the cripple veterans, the mutilated beggars, and the dead prostitutes — that this was how we really were, ugly and obscene, hypocritical and callous.

Into this societal maelstrom, Bernie’s mission with the murder squad is to find out who is killing prostitutes. The killer is also scalping them, earning himself the nickname of “Winnetou,” a Native American character from German author Karl May’s wildly imagined American Westerns. One of the victims is the daughter of a criminal bigwig, Erich Angerstein. He puts pressure on Bernie to find his daughter’s murderer. He is willing to help, and the suspect might even survive his “help.”

Suddenly, the murder squad is pulled off the murder of the prostitutes to investigate another series of murders, that of handicapped ex-veterans. “Dr. Gnatenschuss,” which translates as coup de grâce, is that murderer’s nickname. He has boasted in a letter to a newspaper that he will run rings around the stupid police. Dr. G’s m.o. is to walk up boldly to his victim and shoot him in the head.

Bernie has many ideas and many orders from Herr Weiss, his boss, and Herr Gennat, a fellow detective with lots of experience. While Bernie still searches for the murderer of Eva Angerstein, Erich’s daughter, he must also don a disguise as an amputee beggar. His old army jacket and Iron Cross will see another day in the sun, as long as Bernie does not actually become a victim himself. And he still mulls over the first murder case he handled with the murder squad a year ago, before he was called up to audition to be a permanent member of the squad. That victim, too, was a young woman. She was dismembered and now has been mostly forgotten.

What else is happening in Bernie’s world? Let’s see. He’s a raging alcoholic. He finds a number of women interesting and, for better or worse, they reciprocate. He may be in over his head with the criminal underground. He knows far too much about the gruff and weird underbelly of Berlin’s nightlife, especially the “anything goes” motto of the sex industry. There is extreme poverty in the city. There has been way too much death and everyone is traumatized to some extent. Bernie suffers. Berlin suffers. Hitler marches forward to his future.

Kerr handles all the intricacies of this historical environment and spins a thrilling fictional narrative from it. And Kerr’s writing has humor. Granted, it’s a touch ironic and sarcastic — e.g., “I never yet saw a musical I didn’t think could be improved by a deeper pit for the orchestra, and a bottomless chasm for the cast.” — but it balances the grimness of the crimes and the blackness of Berlin’s soul.

* Fritz Lang’s “Metropolis” is referenced a few times. It was screened in 1927. Lang’s wife appears as a character in the book.
Posted by Barbara Tom at 8:19 PM