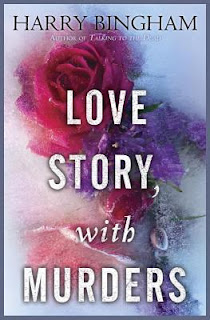 When your popular novel features a protagonist so acutely different, what’s your next move? How do you continue to create interest when readers (presumably) already know the secret to your character’s eccentricities? We should all have this problem. Harry Bingham was born ready to write the sequel to “Talking to the Dead” (2012).

D.C. Fiona Griffiths of a Welsh CID unit is back. This twenty-six-year-old woman (in the fictional year of 2010) spent part of her youth thinking she was dead. She still isn’t quite sure she isn’t actually dead. But mostly now, she lives on what she terms “Planet Normal.” She has a loverly boyfriend, Buzz, and a job she hasn’t managed to lose, although there are a few of her colleagues who don’t like her.

“Love Story, with Murders” is a strange title, but at the end, perhaps you will agree, it is spot on. It first begins with a murder. The murder actually took place several years ago, but the body — or at least part of it, consisting of a leg — was only recently discovered. In someone’s garage freezer. Soon other pieces of Mary Jane Langton, a twenty-two-year-old student and sometime “exotic” dancer, begin to surface.

The title contains the plural, “murders.” And so soon, another body, or parts thereof, makes itself known. This one is of recent vintage and is of a man, Ali el-Khalifi, a lecturer in engineering. His parts are not hidden in freezers or cans of oil the way Mary Jane’s are. His are merely strewn around the suburban-side.

This is Fiona’s reaction to the discovery, of which she was an integral part, of Mary Jane: “[T]his will be a CID case from here on. A sweet little murder. I feel a deep sigh of relaxation pass through me. Of pleasure.” An unusual reaction, wot?

About Fiona’s dad: He’s a criminal. He has never been caught, so he’s either a smart criminal or a lucky one. It is with trepidation that the force has accepted Fiona as a cop. Also about Fiona’s dad: He isn’t her biological father. At about two-and-a-half, Fiona was discovered in her adoptive parents’ car, abandoned. By whom? Why? Fiona continues a desultory personal investigation into it, but there isn’t a lot to go on. And she wouldn’t want to stub her toe on the wrong rocks.

So these are the basic elements to Bingham’s second Fiona story. What makes this book so extraordinary is the same thing that made “Talking to the Dead” extraordinary. Bingham mixes the grisly with the humorous, the sweet with the macabre. He is excellent at keeping both the pacing and storyline off balance. Tra la la la la, boom! For example, at one point Fiona is in dire danger of losing her life. Well, you think, there is a good portion of the book to go and Fiona is the only first person narrator, so she must survive, right? But how? And the fun of it is how Bingham goes about resolving those “difficulties.” Tra la la la la, boom!

Fiona studied philosophy at Cambridge, so every once in awhile Bingham inserts a philosophical digression. Fun. She rarely can feel her feet. Fun? She grows her own weed. Fun? Pile the weirdness on, Bingham!

Here’s a lovely bit of Bingham:

For me, all corpses count the same. One dead body might lead to Barry Precision. Another to nothing more than a love poem lost down the back of a sofa. There is no eminence here, no lowliness. We are all equal under Death’s scythe.

I’ve left out the “love story” part of the title. It’s one of the quieter moments of the book and should be revealed in its own time and only to its reader.