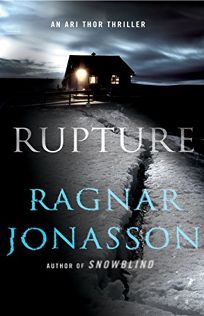 “Rupture” is another atmospheric novel by Icelandic novelist Ragnar Jónasson. Ari Thór, Jónasson’s resolute police inspector, is a big city boy who has been living in the remote town of Siglufjördur for the last few years. His initial misery has slightly worn away, but for a while he was depressed about moving so far away from Reykjavik, about losing his girlfriend of many years, about how the town had nicknamed him “The Reverend,” mistakenly believing he had wanted to be a priest.

The good news in “Rupture,” the fourth Ari Thór mystery, is his old girlfriend seems to be willing to start seeing him again. The bad news is that his small town has been been quarantined because one person has died and another is barely alive because a haemorrhagic virus (of which Ebola is one kind) has come a-callin’. The town goes into lockdown, people barely emerging for necessities. Ari Thór has no room for fear; he still has to monitor, maintain, and defend the town. But mostly, he is just bored, bored, bored.

Batting away the gloom that has descended on the town, Ari Thór becomes excited when a cold case comes his way. Five-plus decades ago, Gudmundur and his wife Gudfinna, her sister Jórunn, and Jórunn’s husband Maríus went to live on an even more remote area near Siglufjördur. Hédinsfjödur was beautiful and wild, but hardly good farming territory. Nevertheless, they stuck to it long enough for Gudmundur and Gudfinna’s son, Hédinn, to be born. Then Jórunn, Hédinn’s aunt, was poisoned. The adults said she had died from suicide. But Hédinn, now an old man, wants to know if that is the truth. An elderly uncle has sent him a photo of the group at the settlement. But who is that unknown young man holding baby Hédinn in his arms? What sort of sinister goings on could there have been? He has come to the police for help. Were it not for the quarantine, Hédinn would have been turned away. But, as it is, Ari Thór has lots of time. With meticulous research and a dogged attitude, Ari Thór plods on.

Ari Thór is also open to helping television news reporter Ísrunn, when she calls from Reykjavik. It is through her that Jónasson develops the two stories of “Rupture,” as Ísrunn helps Ari Thór research his puzzle.

In Ísrunn’s neck of the woods, Snorri Ellertsson, the son of a former contender for prime minister, has been murdered. In a separate incident the young son of Sunna has been abducted. She and her boyfriend, Róbert, are beside themselves. And, hmm, maybe Róbert knows more about the situation than he tells the police. Because of Snorri’s former prominence as the son of a politician and as a long-ago friend of the current prime minister, that story engages the front pages and leading minutes of the newscasts, but only until the young boy’s abduction overwhelms the news. Ísrunn holds onto these stories because she suspects there is something lurking in the background of both. Ísrunn brings her own personal problems to the literary mix as well, sharing the main character spotlight with Ari Thór.

Jónasson draws all the threads together. He mixes sympathy with revulsion, bravery with guile, and drama with even more drama to form some very interesting stories which are satisfactorily resolved at the end.