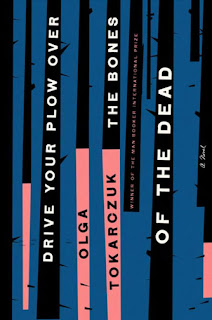 Janina Duszejko is an “old crone” who lives alone in her house in an area fairly distant from the nearest village, in Poland, near the border with the Czech Republic. There are other cabins where she lives, but most of them are uninhabited for most of the year. She is taxed with keeping those properties in good shape, so she routinely makes a circuit of her area, including the “Plateau” from which she can view her area and the land below. Although her age is never stated, she is old enough to have “Ailments” and to refer to herself as an old biddy. Despite her physical difficulty in navigating the course, she enjoys her circuits and a chance to observe the natural world.

The other two occupants of her little area are “Oddball” and “Big Foot.” Of course those are not their real names. Mrs. Duszejko, for that is what she prefers to be called, never Janina, prefers to give people names appropriate to how she views them. (“I’m sure this is the right way to use language, rather than tossing about words stripped of all meaning.”) Oddball is eccentric, a loner, given to timidity in conversation. Big Foot has … big feet. The three of them are the only year-round residents.

One cold night Oddball awakens Mrs. Duszejko to attend to Big Foot, who lies dead on his own floor. Notorious for being parsimonious, Big Foot was hardly likely to have his light on late at night. And that is what led Oddball to investigate and discover Big Foot’s body.

It is obvious from the start that Mrs. Duszejko is an unusual person. She has mysterious physical problems, a belief centered on a reverence for nature, and more than a passing interest in astrology. After it is determined that Big Foot has died from choking on a bone from a deer he killed — probably illegally — and cooked, Mrs. Duszejko believes it was fated because of his cruelty to both humans and animals.

Not only is Mrs. Duszejko odd, but it is hard to believe this odd work is a mystery book. But the bodies slowly start to drop. Mrs. Duszejko and Oddball and just about everyone else in the village are interviewed about the deaths. Who saw what, when? Mrs. Duszejko has a theory, about which she writes voluminous letters to the local police. They are all ignored.

…[D]espite the semblance of cheerfulness that people naively and ingenuously ascribe to me, I see everything as if in a dark mirror, as if through smoked glass. I view the world in the same way as others look at the Sun in eclipse. Thus I see the Earth in eclipse. I see us moving blindly in eternal Gloom, like May bugs trapped in a box by a cruel child. It’s easy to harm and injure us, to smash up our intricately assembled, bizarre existence. I interpret everything as abnormal, terrible and threatening. I see nothing but Catastrophes. But as the Fall is the beginning, can we possibly fall even lower?

In any case, I know the date of my own death, and that lets me feel free.

On how astrology explains all, using the Alien movies as an example:

I succeeded in observing similar conformities with regard to the Alien films, set on a spaceship. Here subtle dependencies between Pluto, Neptune and Mars came into play. As soon as Mars was in aspect to these two Slow Planets at the same time, the television showed a repeat of one of the Alien films. Isn’t that fascinating?

Mrs. Duszejko used to build bridges and now she teaches English to school children once a week. She is helping Dizzy to translate Blake into Polish. She enjoys the cozy nature of Good News’ shop. So she has friends and participates somewhat in village life. And if I may borrow Blake, she worries about the widening gyre that may engulf her world.

Although the rhythm of the book is slow and replete with full-stop digressions into astrology and philosophy, "Drive Your Plow Over the Bones of the Dead" is a book with a strong voice. Olga Tokarczuk won the Man Booker International Prize for an earlier work, so she is an author to command attention. She leads Mrs. Duszejko gently through what appears to be madness and a loosening of the veil.

(For fans of Call the Midwife on PBS, Mrs. Duszejko strongly reminded me of elderly Sister Monica Joan, a cultured woman who took to her calling as one of the first nun-midwives in England, but now wanders adrift from reality sometimes.)

This is a book both splendidly written and translated. MBTB star!
Posted by Barbara Tom at 10:47 AM