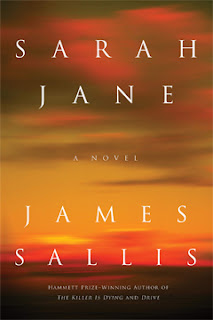 James Sallis wrote some of the best mystery novels I’ve ever read: his Lew Griffin series. His books are brought to life by his understanding of human nature and his poetic writing. Also, apparently Sallis can write from any point of view and sound credible. Lew Griffin was a black private investigator. The eponymous star of “Sarah Jane” is a white woman. He takes her from her teenage years to middle age.

“Sarah Jane” is told from Sarah Jane’s perspective. It is full of her pensive thoughts and softly evasive storytelling. Time goes back and forth but that allows the many revelations to occur in their appropriate places. It allows Sallis to meander us down his path.

This is what Sarah says at the beginning: “My real name is Sarah Jane Pullman.” Sarah also adds:

I grew up in a town called Selmer, down where Tennessee and Alabama get together and kind of become their own place, in a house that spent the first sixteen years of my life getting ready to slide down the hill, which it did right after I left.

Scenes in the Middle East appear and we begin to realize a significant part of Sarah’s history: She was in the military and saw action. So, later when she becomes a cop, it is not such a stretch to imagine that. Yes, I gave away something she does not reveal until maybe half way through the book. The hefty prelude to that part of her story has her meandering through various towns, all the way to, at least, New Mexico, where she took cooking jobs. There were diners and some fancier places, some places where she was bossed and some places where she was the boss. Men go in and out of her life, but it is a solitary journey she eventually takes to the point where she becomes a deputy.

It’s hard to say where Sarah eventually washes up, maybe in Tennessee, somewhere near the capital. She's not in a small small town — maybe a big small town. It’s rather vague but then specificity is not required.

It turns out Sarah is good at her job as a deputy. Part of it is having a good boss, Cal Phillips. Then one day, Cal disappears. All the interesting but tidy stories of life in town disappear. She becomes the acting chief of police, despite herself. Did she have something to do with Cal’s disappearance? Is her narrative disingenuous? Was Cal getting too close to fully discovering her past?

I have to say that if you are looking for a traditional mystery, this ain’t it. Maybe not all your questions will be answered. Come for the story, stay for the writing. For instance:

The ancient tree by the town square, given up for dead most every year before it pushed out delinquent sprigs of green, was filling with leaves.

And when Sarah and another deputy check out a bar fight:

[The men were] swearing and giving forth declarations of what they were going to do to each other, an entire bar fight waged in the future tense, as though they’d caught strains of some futuristic affliction from the toys and models [decorating the UFO-themed bar] surrounding them.

We can’t ever know how others see the world, can’t know what may be rattling around in their heads: loose change, grand ideas, resentments, pennies from the fountain, spiffed-up memories, codes and ciphers.

“Sarah Jane” is a beauty of a book. It is storytelling essence. It celebrates a joy of words and reminds us of the definition of strength.