A Prayer for Travelers by Ruchika Tomar 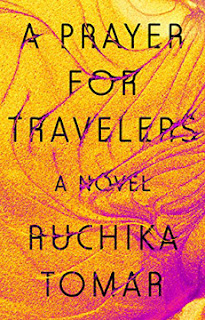 So I had to look up “Pomoc” on the Internet. It is a “Proto-Slavic” word for help, aid, assistance. Hmm. Interesting. And this is why I had to look it up:

“A Prayer for Travelers” is the debut novel by Ruchika Tomar. Here are Tomar’s bona fides: “Ruchika Tomar was raised in Southern California. She holds a BA in English literature from the University of California, Irvine, and an MFA from Columbia University. A recent Wallace Stegner Fellow, she is currently a Jones Lecturer at Stanford University.” I include this information in the event you begin with an erroneous assumption — especially since I began this review with a definition for the Slavic word “Pomoc” — a dangerous undertaking these days in the world of literature. Anybody with any name can write anything.

Cale is a teenager on paper but the events of her life detailed in this book solidly qualify her for adulthood. Who knows anything about her father? Her mother abandoned her, and she was raised by her grandfather, “Lamb.” She and the taciturn Lamb live in Pomoc, a fictional town somewhere in the mountain states in the U.S. It’s a small, poor, run-down town. Apathy seems to be the standard emotion.

At this point, I should describe Tomar’s gimmick. The chapters are out of order, so events occur in a mixed-up timeline. But to be helpful, Tomar has headed each chapter with a number. My guess is that most of her readers have read the chapters the way Tomar has laid them out, e.g., 31, 2, 5, 3, 32, 82, 6, 33, and so on. I tried that and realized I was bored by chapter 32. It’s a storytelling puzzle which can be solved — probably a bonus for mystery aficionados — but the mystery of the missing Penny cannot be discerned by clues, because they don’t exist. So the mystery and puzzle-solving is in the reading.

I read it sequentially. Chapters 2 and 3 are fairly close to the beginning, but chapter 1 is tucked away between chapters 25 and 26, themselves tucked between chapters 29 and 30, all of which are preceded by 78. I knew there was no way I could tackle it the way the author intended. I just couldn’t.

It would probably have made more sense to have events out of sequence if it had been a film. The visual cues (dress, time of day, locale) would help anchor the scene in time. But it wasn’t and readers are all on their own.

Tomar doesn’t need the gimmick of mixed-up chapters. The book holds together pretty well, even when told linearly. She has an affinity for how language sounds and reads. She juggles suspense and character depiction well.

Cale was a nobody in school: “…I had been invisible for so long, I was starting to wonder if I still had a fleshly outline, a concrete human shape.” The popular, if slightly outré, girl group in school was comprised of four girls: Penny, Flaca, Lourdes, Luz. Penny was the leader and a person of fascination for Cale. As they grew older, the gang broke apart and Cale met Penny one-to-one. Cale soon was waitressing at the same diner where Penny worked. Then they started hanging out together. Then they started getting into trouble together. Then Penny disappeared.

In the meantime, Cale’s grandfather is beginning on the short road to the end of his life. Cale is still a teenager. She is used to loss and not used to security. To trust in security was to be betrayed; but still, she hungers for and leans toward it. That defines so much of the motivation in the book.

Although the book features teenagers Cale and Penny, it is not a young adult book. Cale and Penny play at adult responses to adult problems. Their grief is bottled yet loud, their rage vicious yet contained, until it isn’t. There is no one to save the main characters in Pomoc, especially if they refuse to be “saved.”

This book is a challenge and I failed to accept it. But I did think well of the effort.