City of Windows by Robert Pobi 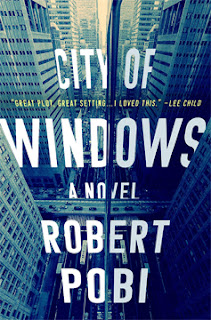 I like books with characters who have a quirky psychology. When both the antagonist and protagonist have quirks —  oh, baby!

Dr. Lucas Page is an astrophysicist who accidentally is teaching a class called, “Simulation Theory and the Cosmos.” He meant it as a joke proposal, but his boss took it seriously. Of course, it is the hit of his department, and comes complete with whiny students. Perhaps he needs a bigger challenge, especially after years with the FBI as a … what? Mathematical profiler? Big brain? FBI jackass? Check the box for “all of the above.”

Page left the FBI when half of him was torn apart in a work-related incident. In the words of his friend, Dingo, “The one that took your drumstick, wing, and peeper?” So Page has to remember to align his face forward so his eyes will point forward together, and he doesn’t scare kids. Still, with one working eye and replacements for his arm and leg, he goes along and gets along. But he is retired from the FBI and is looking forward to spending time with his wife and their four or five adopted or fostered children. They hope the newest arrival will stay, but she will take coaxing and TLC. His wife has taken time off from being a pediatric surgeon and Page has promised two weeks during the school’s winter holiday. And, truly, at this point, you don’t actually expect the hero of this book to be able to keep this promise, do you?

A sniper takes what turns out to be an almost impossible shot in a snowstorm and kills an FBI agent riding in a moving car in Manhattan. Come back to the FBI, says his former boss, Brett Kehoe. No way, says Page. The victim is your former partner, says Kehoe. Multiple page pause. Okay. But just for a few New York minutes.

What a presumption for the authorities to make that Doug Hartke, Page’s former partner, was the real target, given the difficulty of making the shot in a snowstorm! However, there were very few people about, so maybe Hartke was indeed the target. Using his mental abilities, Page discerns the sniper’s perch.

Throughout the book, author Robert Pobi describes several characters, but mostly Page, in technology terms. They power down, tik-tok through sequences, have numbers appear overlaid on the landscape. At one point I thought, perhaps this is a science fiction work? But, no, that’s just a tic of Pobi’s writing. And it underscores how unusual Page is. Kehoe describes what Page does as “simple acute spatial awareness, nothing more than a very precise sense of comparison. Apparently his intuitive understanding of geometry converted the landscape to numerical values.” In any event, it’s a fabulous construct.

There’s not much for Page to do to help the FBI besides pinpoint the shooter’s spot; the shooter has not left any evidence, discernible tracks, or whiffs of incriminating scent in the air. There’s no way to solve this crime. The FBI is left with looking up the usual suspects, including the prime suspect, a rich, crazy French shooter who has disappeared. Nah, says Page, it’s not the French guy, but nobody is willing to believe him, because otherwise, there is only The Invisible Shooter.

After the second and third victims are found, with equally invisible telltale signs on the part of the shooter, Page is finally dragged back into active service. He forsakes a disgruntled wife and disappointed children.

What do the first three victims — oh, yeah, there are more — have in common? They are all career law enforcement. Can an analysis of their pasts eventually triangulate a commonality?

There are more sniper victims. The criteria for being targeted seems to become looser as the rampage goes on. The near mystical sniper is hunted by the near mystical analyst. Or is it the other way around?

And what is that elusive connection? There’s quite a bit of book before the aha! moment arrives. It is worth the wait.

There are some unanswered questions, although Pobi asks them himself, that are sort of swept over to the side. A crucial clue comes from a bizarre connection. I’m not sure I’m satisfied by that. But I am satisfied by everything else*. Great book. MBTB star!

* I’m hoping maybe Pobi hesitated before he added this bit for Agent Whitaker, a female FBI agent: She “had worked in places populated exclusively by women before, and the takeaway was that they were just as bad at bickering — they were just sneakier and meaner about it.”