Lady in the Lake by Laura Lippman 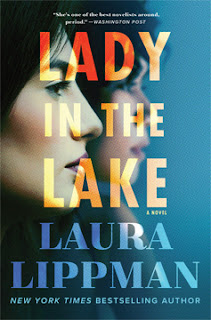 I wish I hadn’t watched the third season of “The Marvelous Mrs. Maisel” before reading this book. This is not a humorous book, but there are certain quirks and traits shared between Madeline “Maddie” Schwartz and Midge Maisel. They come from Jewish families who only want their daughters to be good wives and to not appear publicly in shameful professions. Mrs. Maisel, if you don’t know, is a stand-up comedian in an Amazon Prime series. Mrs. Schwartz is an aspiring reporter, at the age of thirty-seven, after having left her husband and sixteen-year-old son to find out what would fulfill her life. Both can cook.

It is 1965-66 in Baltimore. Mrs. Schwartz — Maddie — is learning to be part of the larger Baltimore world, after having spent her housewife years trying to keep a kosher house, anticipate her husband’s needs, deal with a sullen teenager, and throw the perfect dinner party when her thoughtless husband drags people home at the last minute. Milton is a putz, but Maddie has enabled that. And can he be a putz if that is the standard operating procedure for men — Jewish or non- — of the time?

After she leaves the befuddled Milton, Maddie is tossed into instant penury. She refuses to live with her parents, but she has very little money. Her very first scheme is to pretend her apartment in an undesirable neighborhood (read “black”) has been robbed and her engagement ring stolen. She collects the insurance money and then hocks the ring. That and a randomly-selected pittance Milton provides is what she will live on while she tries to follow her bliss.

Tessie Fine, eleven-year-old Tessie Fine is missing. Maddie knows the girl’s father’s fur store. The Jewish community is organizing search parties of the area where she was last seen. Maddie, however, is a woman, so she is rejected as a search party member. Not to be deterred, she hies off with a woman she just met to do her own searching. Based on her own personal experience of the area being searched — i.e., she used to make out in certain spots — she heads for “her” spot. And there lies the body of Tessie Fine.

Eventually, Maddie finagles that discovery into a bare bones try-out at one of the lesser Baltimore papers, the Star. (Oh, my goodness, remember when there was more than one city paper and almost every city and town had a paper?) She's not exactly a reporter, but her toe has crossed the threshold. In third-person chapters, author Laura Lippman, a former newspaper reporter herself, describes Maddie’s second coming-of-age as an adult.

All the while, the line is being drawn from a probable crime — Cleo Sherwood, a young mother of two, left her sons with her parents, went to work in a bar, and disappeared late one night — to the discovery of a body in a lake. Cleo was black, i.e., her story has not rated much or any mention in the major papers. This is Baltimore and black lives barely mattered, not that Baltimore had that locked up for themselves. Where is Cleo? Maddie cannot leave the sleeping dogs sleeping. She purposely and accidentally stirs up the past.

Laura Lippman has re-created life in 1960s Baltimore. She drops observations that bring back that time: fashions, buildings, phone booths, politics, segregation, mass migrations of communities as “the blacks” moved in. Lippman wants you to make no mistake about where her story is set.

Lippman brings so many of the subsidiary characters to life in short first-person narrated chapters. She faultlessly melds them with the third-person narrative of Maddie’s journey. In the end, after she has turned things upside-down and wrung out every tasty morsel of the unexpected, she hits you with a chapter set in 1985. This is a thoughtful story of unintended consequences.

Despite having Mrs. Maisel on the brain as I read this book, I felt this was an outstanding addition to Lippman’s already outstanding output, even if there was no stand-up routine in the book.

*This book is on the year’s best list for The Wall Street Journal, Publishers Weekly, and The Washington Post.