The Girl from Widow Hills by Megan Miranda 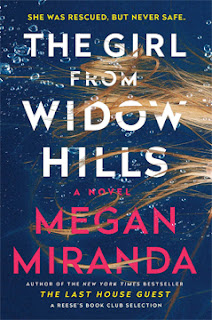 Arden Maynor was six years old when she disappeared one night. Her mother frantically called 911. Arden’s shoe was caught in a storm drain. There was a huge rainstorm and the thought was that Arden had been swept away by the water into the drain. Her mother relentlessly urged people to keep looking for her, even though there was little hope for her survival. But, indeed, Sean Coleman, a 32-year-old father who had volunteered to help look, saw Arden’s little hand clutching onto another drain cover. He held onto her until a way could be cut into the pipe to save her. She became a miracle child.

In the real world, children miraculously saved from dire situations have dotted the news over the years. The media picks up anniversary stories of those children and their families. We viewers share in the victories and glow in the reflected happiness of the lives now lived in full. Those children and families belong to us, too, by virtue of our thoughts and prayers.

Olivia Meyer is twenty-six years old and works in hospital administration in Central Valley. Her best friends are nurses Bennett and Elyse. She owns her own home on a remote street. Her closest next door neighbor sold her the house. He’s old and seems kindly. He watches out for her and she gets him groceries.

Everything is going well. She is trying to extricate herself from a toxic relationship and seems to be succeeding. She has distanced herself from her toxic past. A phone call provides the conclusive touch: Her mother has died. A box of mishmashed things arrives as her last possessions.

Then one night, Olivia’s worst nightmare occurs. Only it’s not a nightmare. She was sleepwalking, something she hadn’t done since she was a child, and tripped over a dead body in her front yard. Worse, with the arrival of the police, she realizes she knows the victim. He is Sean Coleman, her savior when she had another name, another life in Widow Hills far away. She had not seen or heard from him in the twenty years since. Why was he in her front yard late at night? Who killed him? Did she?

This is another thriller by author Megan Miranda (“The Last House Guest”). Olivia’s is the only viewpoint. Everyone else is suspect. Trust no one. No, wait, maybe trust him. Nah, he’s too angry. How about her? All of a sudden she’s too flaky. What about the handsome man who suddenly appears in town? Her former boyfriend? Nina, the cop who hates her neighbor, the old man? Yeah, what about the old man, hmm? He has a lot of guns.

There’s a TV movie in there somewhere, and it will be just as entertaining.