The Immortalists by Chloe Benjamin 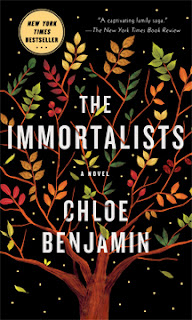 Not a true mystery novel.
Would you want to know the date of your death, especially if you were very young? The four Gold children – Varya, Daniel, Klara, and Simon – pool their money and go to a fortune teller to hear when they will die. Before any of them have a chance to really live, they are already thinking of their deaths. After they hear the old woman prophesy, they soberly return home. None tell the others what they learned.

Then author Chloe Benjamin moves her novel forward in four parts, one for each of the children. A few years later, after their father has died unexpectedly young, we learn that Simon is prophesized to be the first to die. But will he? With the thought in mind that he may not have many years at all, he leaves school at about 15 years of age and runs away to San Francisco with Klara. Klara, about 17, has also decided she must begin her life as soon as possible. They leave the rest of the Golds back in New York City, older siblings Daniel and Varya and their mother, Gertie. The fortune teller has also doomed Klara to die young.

Strangely, although the premise is chilling, the thought behind the novel is very plain and elegant. What do you do if you believe you are at the mercy of fate? How do you live your life? Do you huddle in a corner and then laugh when the due date comes and goes. Then do you begin to live? What about those wasted years you spent huddled in that corner?

Similar scenarios have played out in many books, most of them science fiction, over the years. What about a nuclear apocalypse? A giant earthquake? A comet traveling to collide with Earth? But here is a book that asks what if instead of months or minutes, thought of your death loomed over you for years?

There are some strange events. They could be supernatural. On the other hand, they could be just lapses in attention, memory, analysis. Benjamin does not give you easy answers as each section unfolds.

We are left with a magic trick at the end. A cascade of nested cups lifts, one after the other, and what, we wonder, will lie at its center.

The way Benjamin writes each character’s yearning, fears, wonder, and love is worth reading.