All Systems Red by Martha Wells

I’m in love! With a murderbot. 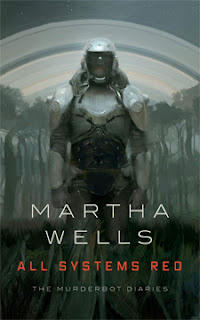 Our protagonist has no name. “Murderbot” is the designation it has given itself. Part organic, mostly inorganic and weaponized, the SecUnit, its more official name, is sold or leased out, mostly for protection. There is a regulator — remember when R2D2 tricked Luke Skywalker into detaching its regulator? — which Murderbot has disconnected through a fluke when it was reprogrammed after a disastrous mission. Essentially, Murderbot is a free agent, although no one knows, including his latest human crew.

Murderbot is different, no matter how much the crew tries to treat it as they would a human. It does not like to look people in the eye, becomes uncomfortable riding in their part of the ship and not in its cubicle in the cargo hold, and really doesn’t want to carry on conversations with them. A vaguely autistic robot? Perhaps. It really likes episodes of a space soap opera and watches the episodes in its down time. Its greatest lessons on humanity may be learned from tele-dramas.

Although “All Systems Red” is short, it is packed with humor, thrills, and wonderful characterizations.