The Missing American by Kwei Quartey 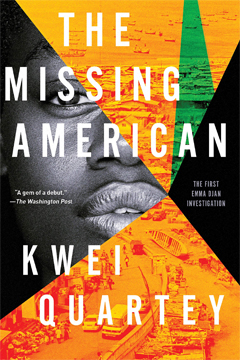 I have read a few of the books in Kwei Quartey’s Darko Dawson series set in Ghana and enjoyed them. “The Missing American” does not have Darko in it and there’s an American character, stretching the author’s talents to include both of his real-life worlds in his fictional one. Quartey was a medical doctor in California before he retired. He grew up in Ghana and the United States.

The Darko series is flavorfully foreign, whatever that might convey to you. Quartey gives texture to his descriptions of life and culture in Accra, Ghana. He does so as well in “The Missing American,” but because he has an American character, parts of his book have a very Western voice. It is an impressive presentation of different cultural points of view.

American Gordon Tilson doesn’t appear until Ghana and quite a few of the Ghanian characters are introduced, but it is Gordon's case which provides the problems private detective Emma Djan must solve. Emma wanted to work in the Accra CID force. She was stuck in a boring, mostly clerical job for the department. It is the compelling story of why Emma wound up a private investigator rather than a detective on the force that takes place in the initial part of the book. Quartey tells that tale with feeling.

Emma meets Gordon’s son, Derek, when he comes to Accra to find his father who has disappeared. In his home in the U.S., Gordon met a Ghanian woman online. Surely, it could not be an Internet scam, Gordon thinks, he's much too sophisticated for that. Gordon decides it is love and flies to meet her. He is no stranger to Ghana, having been in the Peace Corps and met his wife there years ago. When “Helena” proves elusive, Gordon begins his own investigation into what went wrong. A white man without command of the various languages traipsing around Ghana … what could go wrong?

Quartey also plays with the theme of corruption in politics and the police bureau. He introduces us to the sakawa boys, the Internet scammers. There is also a local priest, SWAT team members, a crusading reporter, and a center for autism, and they all fit together somehow.

It is very good storytelling and a great look at cultural differences and expectations.