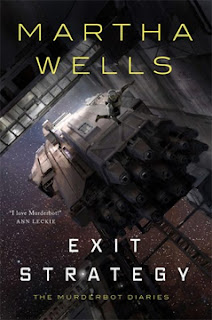 These books are not mysteries, but they are good science-fiction.

It has been a long time since I read an author’s works one after another. I think there is a good reason I don’t usually do that. I get author fatigue if I read too many books in a series. Martha Wells has a pretty fresh voice, so that sustained me to a large extent. But #5 in the series, “Network Effect,” is a full-sized novel, full of technical talk and imagining the protagonist in a “Tron”-like environment (or so I imagine). I wanted to reach the end. I had been conditioned to expect something more like a 160-page work. Instead, “Network Effect” was 352 pages. I’m a baby with no patience, I admit. Still, I love this series and the tribulations of a synthesized organic-inorganic construct who is a rogue security agent.

Books three through five in the series take Murderbot — granted, it is the only one who refers to itself this way — aka “SecUnit,” from finding out what happened to it in the bad old days when it worked for a corporation which rented it out to other corporations to maybe finding a place to hang its hat. Maybe with friends. Maybe with a future in which it can say yes or no, as it pleases. But author Martha Wells is good at throwing a curveball, so one should expect the unexpected with her.

I won’t go very deep into the plot for these three books, but I will tell you a little bit about Murderbot. As a hired security unit, Murderbot had to be prepared to be violent, to kill if necessary. Until it dislodged its regulator and became an independent, free-thinking AI, it was at the mercy of its corporation. Even after it freed itself, Murderbot continued to work for the company for lack of other possibilities. That changed when it met Dr. Mensah, an administrator of the Preservation system of planets. She and her people were determined to recognize Murderbot’s “personhood,” whether it wanted that or not.

In order to clear up a blank spot in its memory, Murderbot journeys into its past and visits a place it feels holds a bad secret. In another adventure, it helps Dr. Mensah, with whom it has an ill-defined relationship, out of a pickle in which Preservation finds itself. The last book, a full-length novel, has Murderbot suffering the slings and arrow — many slings and many arrows — of misfortune, as it and its crew get drawn into the fight for the soul of a lost colony.

As I mentioned, the latest book has lots of technical stuff, some of which can be confusing, but it’s possible to push through. Wells is very good at providing a good story backbone and she tries very hard to make the coding talk accessible.

Once again, I highly recommend this series. I am looking forward to whatever else springs from the creative mind of Martha Wells.