Blacktop Wasteland by S. A. Cosby 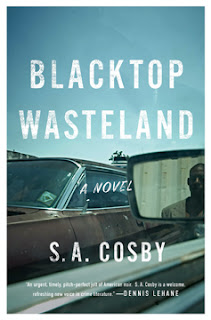 S. A. Cosby has written a stark, violent, dark, noir book about a family man in rural Virginia who makes a choice and how that choice leads him deeper into a place where he didn’t want to go.

Beauregard grew up Black and poor. His dad was a criminal. When his father left the family, his mother fell apart. Despite taking a lot of left turns when he should have turned right, Beauregard managed to get himself right. He married Kia and had three children, one of whom was with a woman he only knew briefly. Nevertheless, when he is able, Beauregard helps out with the daughter from that union. His daughter, Ariel (influenced by the Disney cartoon), is thinking about going to some kind of college after she graduates. One of his sons needs braces. The payment is due on his garage. The bills are piling up, and the life Beauregard has tried hard to build over the years is falling apart.

Beauregard does not want to step backwards. He wants his family to have a better life than he had. He wants to provide for his family, to run an honest car repair business. There was a difficult road to this place in his life. Once upon a time Beauregard was a criminal. He was a getaway driver. And he was good. Very good.

Beauregard grew up driving fast up and down and spiraling around the hills of rural Virginia. No one could catch him. He was just like his dad, another man good with a car, born to run fast. But now Beauregard has mostly put the days of running wild behind him. Until his money woes become a little too heavy.

A deal put together by some knuckleheads he knows promises to be easy money. Suddenly, “Blacktop Wasteland” is a caper book. It’s an exciting one. The men are planning to rob a jewelry store. No one will get hurt, a bag full of diamonds will be theirs to split, Beauregard will drive the getaway car. The book will end after a hundred pages. (P.S. It doesn't.)

The robbery should not have been difficult. If only the fellows on the crew had been smart, if only one of them hadn't been hopped up on something, if only people hadn’t gotten hurt. All of a sudden, on the run from serious consequences, Beauregard guns the getaway car and does the impossible: He gets himself and his crew away.

But you know, stupid people stay stupid, and soon the people who lost the diamonds come calling. And they are not nice people.

There are a lot of dead bodies. Things go bang and boom, crash and whomp. When Beauregard, by far the brains of the entire story, is planning something, the story quiets down a little, while Beauregard does his brainy best, and we get to watch. That part is especially good.

The question you should ask yourself before you begin this book is, Can you take it? It’s a tough-talking storyline. Even if you admire the heart-grabbing way Cosby revs up his story and hauls you up to face a dilemma you personally hope you will never have to see, there’s a shock to the system — there should be a shock to your system — about what Beauregard chooses to do.

If you go for it, you will be rewarded by great writing. Cosby offers a heart-wrenching conflict. Iron Man does not come to the rescue. No lawyer in a tidy suit pops in to say, Hey, need some help? Jeff Bezos doesn’t offer to share his billions. There’s just this harsh fictional reality Cosby has created.