Back Bay Blues by Peter Colt 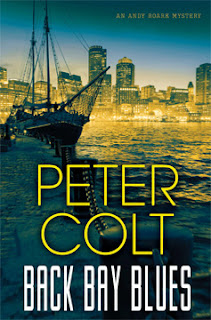 What do you get when you mix Robert B. Parker, Lee Child, Stephen Hunter, and the current crop of novels of people dealing with coming back into ordinary life in the United States after having been in a war? “Back Bay Blues,” by Peter Colt.

Robert B. Parker’s Spenser series is honored by at least three mentions in the book. Colt’s main character, private investigator Andy Roark, may be a licensed P.I. in Massachusetts like Spenser, but his life is rootless, or rather, it is still rooted in a war halfway across the world. Andy is a Vietnam vet, but more than that, he was an elite special forces operative who saw the worst that war could throw at a soldier. Stephen Hunter’s sniper, Bob Lee Swagger, is meticulous in his planning and broad in his knowledge of implements of destruction, and there’s a long, similarly satisfying section of the book devoted to planning one of Andy’s missions.

There have been a few authors who have created notable characters who went to war and came back with a psychological burden. I’ve been especially taken with the established authors like the aforementioned Stephen Hunter and Michael Connelly, but also with some of the newer lights like Nick Petrie (Peter Ash) and Susan Furlong (Brynn Callahan), for example. Colt adds an extra challenge the others didn’t: His book is set in 1982. (Except of course for those authors who actually were writing and publishing in 1982!)

In 1982, Andy is still relatively young after surviving the war and being mustered out. There are no convenient cellphones to help him out of predicaments. There are no omnipresent CCTVs. The Vietnam War is still close enough in time that it plays a major role in this book. PTSD is mostly just a set of letters.

During one of his cases, Andy spots a small cafe, The Blue Lotus. He smells the Vietnamese food as soon as he enters. Over the course of many subsequent visits, he becomes friends with the owner, Nguyen. They talk about life in Saigon just before the fall. “Round Eye,” Nguyen calls Andy, but there is no bitterness or spite attached to that. They drink old cognac.

Coincidentally, a young Vietnamese woman, Thuy Duong, approaches Andy to solve a murder. Her Uncle Hieu was murdered. He was a journalist at a Vietnamese newspaper. He had soured on an organization called the Committee, a group of refugees purportedly interested in returning to Vietnam and reclaiming its lost country. Could Hieu have come across something damning and been killed for his knowledge? Or was his death just one of those random homicides, a mugging gone wrong? Thuy also wants to know if her uncle’s death was somehow related to the death of another Vietnamese man in Chinatown in Boston.

The one thing we can anticipate is that these cases will stir up old memories. Andy, as far as we know, never tried to deal with the trauma of his time in Vietnam. It cost him relationships. It has made him a loner. He has nightmares and sometimes flashbacks. Good dramatic stuff into which readers can sink their teeth. But first, some meandering.

The book almost lost me with the first part of establishing Andy’s character: bona fides (ex-cop), Quincy and Boston background scenes, Boston weather, Boston traffic, Spenser paeans. But once Andy met Nguyen and Thuy, the action started to build. Then my interest was almost torpedoed by Andy’s  limp pseudo-romance with Thuy. But when Andy began to figure out how to investigate the murdered men, it was game on.

As I said before, I really enjoyed the section when Andy planned a covert mission involving a potential motive for the men’s deaths. Andy enlisted the aid of Chris, a former SF comrade, currently an unofficial medico to a local bike gang in San Francisco, to help him. Chris was a great character. The mission and Chris are the elements that drove me to finish the book.

I enjoyed this book. But I won’t give it an MBTB star because it had a slow start — many others would not agree with me, I know — and the sex scene was insipid. Colt gets high marks for hero worshipping Robert B. Parker and for capturing the essence of a tough guy P.I. to whom Spenser could relate.

"The Off-Islander" is the first Andy Roark book.